Makhyoun: Sharia must be in constitution regardless of vote 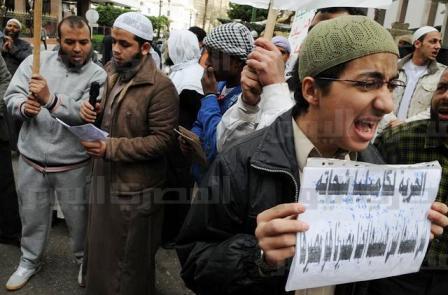 Younis Makhyoun, a member of the Constituent Assembly and a member of the supreme body of the Salafi-oriented Nour Party, called on Egyptians to support Sharia in the constitutional referendum, but added, “Sharia, however, must be applied without voting.”

In a party conference in Suez, Makhyoun said that Salafi members of the Constituent Assembly disagreed with “secularists” on the article concerned with applying Sharia or just the “principles of Sharia” in the constitution.
"I told the secular parties, ‘If you are looking for a secular constitution, you shall look for people other than the Egyptian people to draft this [secular] constitution for, because Egyptian people love Islamic Sharia,” said Makhyon
In previous statements, Shaaban Abdel Alim, also a member of the Constituent Assembly and the supreme body of the Nour Party, said that Salafi members within the assembly reject the current text of Article 2, which states that "the principles of Islamic Sharia is the main source of legislation."
“We are still insisting inside and outside the Constituent [Assembly] to include the word ‘provisions’ in the article, or delete the word ‘principles’ and leave the rest of the wording as it is,”Abdel Alim said.
Makhyoun referred to the current period as “a crossroads before the rule of Islam or the rule of blasphemous provisions,” and further accused “liberals and secularists” of having “high voices trying to forcibly impose their opinion through the media and scare people away from Islam."
Tweet
Pope Shenouda Article