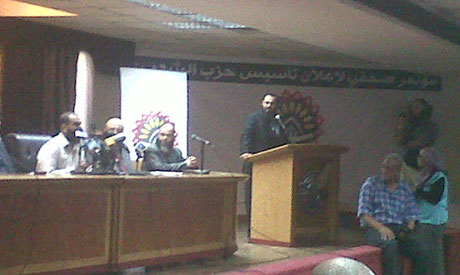 Speaking at the launch news conference, party spokesman Ahmed Mawlana said that the People Party is a pro-civil state party with an Islamic reference.
"We will pay attention to cases that were abandonded by other Islamist parties," he continued, referring to workers' and farmers' rights, as well as the rights of minority groups in Sinai and Nubia regions.
The 55-page tentative draft of the party's founding principles describes the party as one that aims at upholding Egypt's identity as an Islamic country, while upholding the rights of non-Muslims and freedom of religion.
"Every experience that has challenged Egypt's [Islamic] identity has failed. However, there was an estrangement between the people and Egyptian identity that started with the British occupation. The party aims to roll back the estrangement between the Egyptian people and their identity," said Tarek Abdel-Rahman, member of the party's high committee.
Notably, two key figures from Coptic groups spoke during the conference endorsing the party: Nader El-Sayrafy, head of the Copts of 1938 group, and Mostafa El-Maraghy, head of the Coalition of Egyptian Copts.
"We [Copts of '38] have requested to be governed by Islamic Sharia to prevent attempts at creating divisions that would result from separating Muslims from non-Muslims in the constitution, which contradicts with the principles of citizenship," El-Sayrafi said during his endorsement speech.
"Islamic moderacy is the cornerstone of Egyptian culture. The People Party is indeed a strong addition to the country's political arena," said El-Maraghy during his own speech.
Mohamed Zayed, member of the Popular Front for Protecting the Revolution, an Islamist activism group in Sinai, also spoke at the conference. The party's agenda includes Nubian and Sinai citizens in several references.
"Members of the Salafist Front have honoured our invitation to visit Sinai and there will be more to come. The people of Sinai are inclined to support the implementation of Sharia," Zayed said.
"There will be a separation of administrative affairs in the party. Leaders of the Salafist Front will not interfere in the decision-making process, as decisions will will only be made by the party's [five-member] high committee," said Mawlana, answering a question about the relationship between the Salafist Front and the party — particularly compared to the involvement of the Salafist Call group in the decision-making process of El-Nour Party, Egypt's largest Salafist party.
"The Salafist Call and its party resorted to a no-clash policy with the military leaders after the revolution, while the Salafist Front, which was formed in the wake of the revolution, participated in [anti-military] protests and took a hard line on calling for retribution for the revolution's martyrs," Mawlana continued.
When the announcement of the imminent launch of the party was made last week, Khaled Saeed, one of the party's spokesmen, said the party would participate in upcoming parliamentary elections and possibly enter into an electoral coalition with other parties.
The Salafist Front is one of a number of Salafist movements to emerge after the Egyptian revolution and includes several prominent preachers and activists. The group identifies itself as an association of independent Islamic and Salafist figures and proselytising blocs across Egypt's governorates.
The party's announcement comes at a time when El-Nour Party, which came second in the first post-revolution parliamentary elections, is faced with an internal leadership crisis.
Meanwhile, former Salafist presidential candidate Hazem Salah Abu-Ismail is expected to announce the formation of his own Salafist political party, dubbed the Nation Party, in the coming weeks. The party is likely to attract a large number of Salafist voters due to Abu-Ismail's huge personal popularity.
Abdel-Moneim Abul-Fotouh, the moderate Islamist former presidential candidate, also recently founded the Strong Egypt Party, drawing on Islamist supporters.
Elections are slated for one month after the constitution is approved by a national referendum.
Tweet
Pope Shenouda Article