Dozens of women protest against constitution in Giza 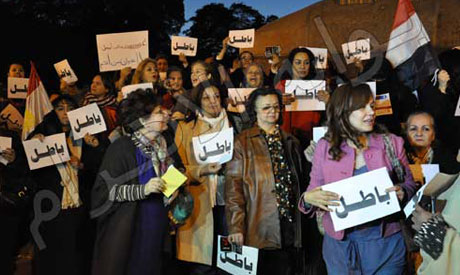 Dozens of Egyptian women demonstrate in Nahdet Misr Square in the governorate of Giza on Wednesday evening against the proposed draft constitution, ahead of phase two of the national referendum poll scheduled for Saturday, 22 December.

Women from diverse social backgrounds participated in the march, most of who belong to opposition parties and rights groups. The female protesters in the square held signs saying “void” and raised them in the direction of traffic to promote a ‘No’ vote against the constitution on Saturday.
The protest, organized by citizenship rights movement Bahia ya Masr, called for women's rights to be protected and promoted. Many rights groups and opposition parties, who criticize the draft charter prepared by the Islamist-led constituent assembly, denounce the draft for falling short of upholding gender equality and women's rights.
The second phase of voting includes the remaining 17 governorates, in which Egyptian residents of Giza, on outskirts of Cairo, will vote on Saturday.
The first phase of Egypt's referendum took place on 15 December across 10 governorates.
Unofficial results of the first round show 56.5 per cent approval for the draft charter, while 'No' votes reached 43.5 per cent.
Tweet
Pope Shenouda Article