Hosni Mubarak in hospital after fall 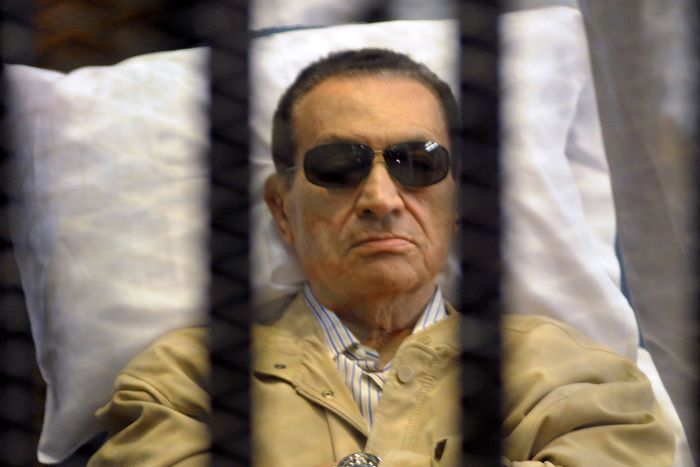 Mubarak, 84, was forced out of power in a 2011 uprising and sentenced to life in prison in June of this year for his role in killing protesters during the revolt.

He was admitted to a prison hospital that month following what security officials called a "health crisis".

Mubarak's health has been the subject of intense speculation in Egypt and he has spent much of the time before and after his trial in the prison hospital.

His lawyer said he was transferred to the military hospital after fracturing a rib in the fall in his prison clinic.

He said he also suffered from lung complications and dizziness.

"[His] health condition is deteriorating to some extent due to the president's fall the week before last," lawyer Mohamed Abdel Razek told Reuters.

Mubarak is to be treated at the military hospital in Cairo's Maadi suburb.

"He will stay for a while," a security source told Reuters.

Mubarak's legal team had been pressing to have him moved from the prison hospital to a better-equipped facility, saying he was not receiving adequate treatment.

The exact nature of any of his ailments is unclear, with state media reporting a variety of illnesses ranging from shortage of breath to heart attacks and comas.

On July 16 Mubarak was sent back to prison on the orders of the former public prosecutor who said his health had improved and he no longer needed the advanced care of the military hospital where he had been moved in June.

At the time, senior officers and military sources gave various accounts of Mubarak's condition, including that he was in a coma and on life support.

The fate of his family, accused by Egypt's new rulers of accumulating vast wealth illegally during Mubarak's long reign, is also the subject of much speculation