IMF official in Egypt on Monday for loan talks 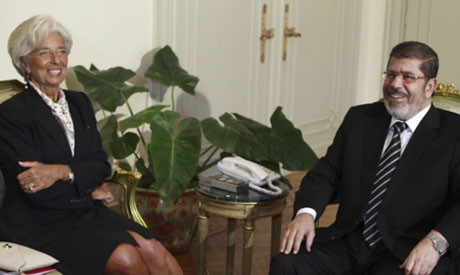 A top International Monetary Fund official will visit Egypt on Monday for talks likely to focus on the $4.8 billion loan agreement frozen last month because of political unrest in the country.

The trip to Cairo by Masood Ahmed, director of the IMF's Middle East and Central Asia department, comes at the invitation of Egyptian authorities, the Washington-based lender said Saturday in a statement.
Discussions will focus on "the most recent economic developments, their policy plans for addressing Egypt's economic and financial challenges, and possible IMF support for Egypt in facing these challenges," the Fund said.
Less than a week ago, Egyptian Prime Minister Hisham Qandil said that Cairo wanted to resume talks with the IMF on the loan request.
That request, made last August, was suspended for a month on December 11, with Cairo saying the postponement was "because of the political situation in the country."
The IMF and Egyptian authorities had provisionally agreed on the 22-month loan -- aimed at helping the government bridge financial shortfalls through fiscal 2013-2014 -- on November 20.
Egyptian President Mohamed Morsi's government is going through its worst crisis since his election in June to replace long-time strongman Hosni Mubarak, mainly over a referendum on a new Islamist-drafted constitution.
The political instability has hammered the country's tourism industry, its major source of foreign revenue, and has also scared off foreign investment.
Egyptian state media reported Saturday that the country's finance and interior ministers were likely to be replaced in a government reshuffle on Sunday.
Tweet
Pope Shenouda Article