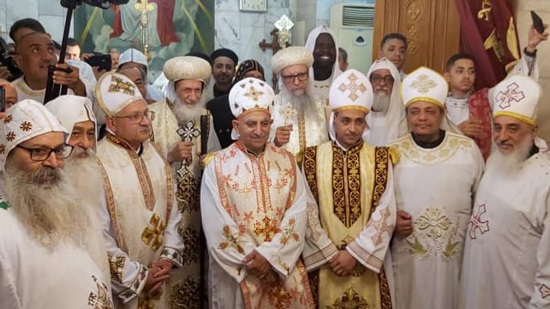 New priests ordained at the Coptic Church in the Sudan

Bishop Elia of Khartoum and South Sudan ordained 3 new priests at the church of the Virgin Mary in the Khartoum. The priests are Fathers John Phelps, Ibrahim Rushdie, and Daniel Fathi. The ordination ceremony was also attended by Bishop Sarabamoun of Atbara, Omdurman, and North Sudan.

Bishop Bfnotious of Samalout ordained a new pretest for the ministry in the diocese. The ordination ceremony was held at the Cathedral of Saviour of the World. The media center of the Coptic Orthodox Church said that the new priest is Father Theodor Malak. 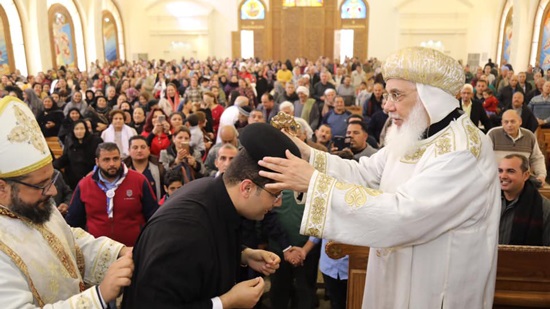 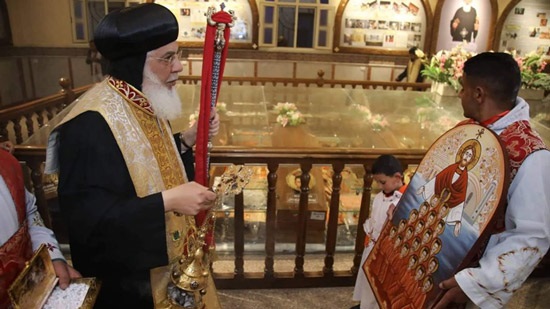 The Church of the Martyrs of Faith in Awr village in Minya opened a memorial service for the 21 Coptic martyrs of Libya. Bihsop Pfnotious of Samalout said that the memorial included statues for the martyrs showing the process of their martyrdom, which was designed by Dr. Girgis al-Gawly, professor of sculpture at Minia University. He explained that the memorial also includes a documentation of the story of the martyrs.

Pope Tawadros receives the Priests of Alexandria in Wadil Natroun

His Holiness Pope Tawadros II, Pope of Alexandria and Patriarch of St. Mark See, received yesterday the priests of Alexandria at the headquarters of the ‘Logos Center’ in the Monastery of Saint Bishoy in Wadil Natroun. During the meeting, Pope answered many questions with the priests and delivered a speech about how can priests discovers talents among their congregation. 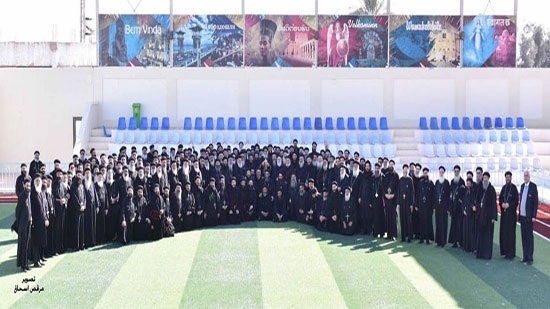 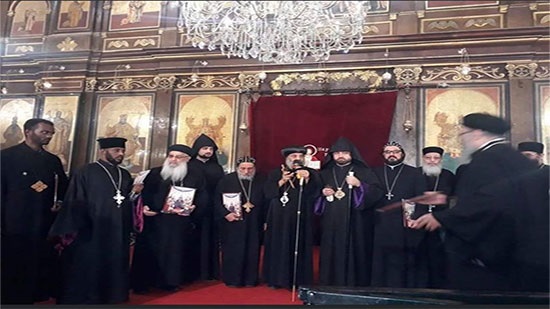 A number of bishops of the Eastern Orthodox Churches held a meeting yesterday in the Church of St. Mark in Klot Bai to discuss the melodies and hymns among the various churches. The media center of the church said that the meeting was attended by Bishop Rafael of the central Cairo churches, and Bishop Ashod, representative of the Armenian Church, as well as representatives from all eastern Orthodox Churches. The churches of the Eastern Orthodox family participated in the melodies in the various traditional languages of the churches, namely Coptic, Syriac, Armenian. the Amharic (Ethiopian Church) and Tigrinya (Eritrean Church), Arabic, and the language of Geez shared by the Ethiopian and Eritrean churches.

A minor Coptic girl called Lisa Romani Manasseh, 17 years old from Ezbet El Nakhl, disappeared 3 days ago. Police were reported about her disappearance and the matter is currently under investigation. 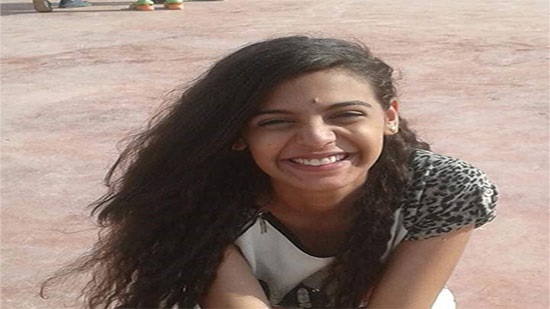 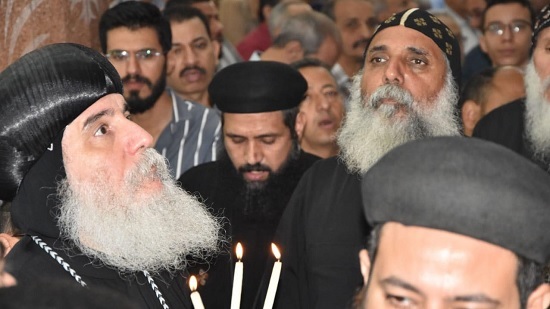 The Media Center of the Coptic Orthodox Church mourned the Departure of Father Boktor Munir, Priest of the Church of Saints, St. Anthony and St. Paul in Beni Attia of the Diocese of Beni Suef. The funeral was held today and headed by Bishop Ghobrial and attended by a large number of clergy and the congregation of the church. Pope Tawadros II has offered his sincere condolences to the bishop and family of the late father.

His Holiness Pope Tawadros II, Pope of Alexandria and Patriarch of Saint Mark See, met On Tuesday with the President of the Dialogue of Cultures and Religions Group of European People s Party. This came during his visit to the headquarters of the European Parliament today as part of the pastoral care visit to Europe. 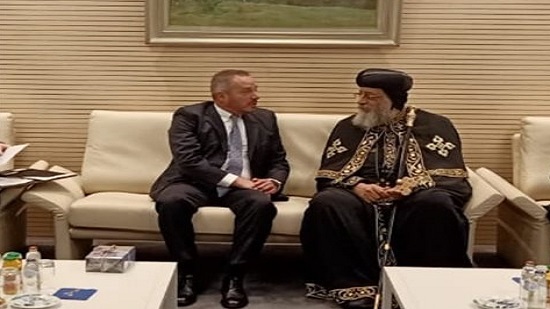 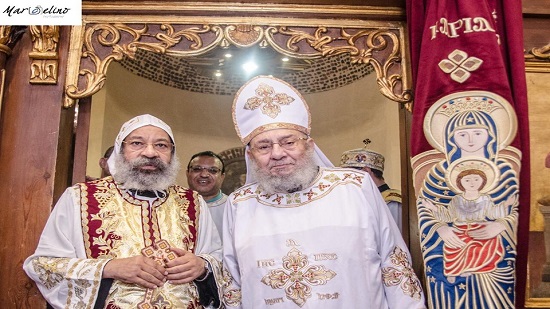 Pope Tawadros delegated Bishop Raphael of Central Cairo Churches, to promote Father Antonisus Fekry to the rank of Hegumin. A statement issued by the Church Media Center said that priest of the Church of the Blessed Virgin Mary in Fajala has wrote many important books including the interpretation of the Holy Bible.

The Media Center of the Coptic Orthodox Church said that Abba Rafael, Bishop of the Central Cairo Churches, opened the fifth session of the Pope Discourse Center for Theological Studies, entitled The Incarnation of God and the Nature of Christ . Bishop Rafael delivered two lectures on the subject of Incarnation and Redemption in the Apostolic Thought of St. Athasius . 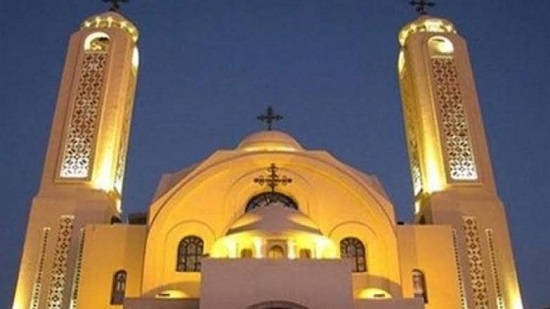 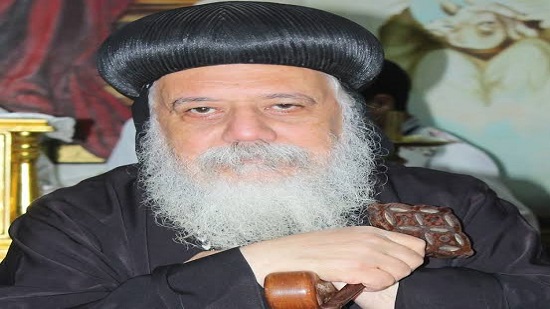 Pope Tawadros arrives in France and starts a pastoral visit

The Media Center of the Coptic Orthodox Church announced that His Holiness Pope Tawadros II, Pope of Alexandria and Patriarch of St. Mark See, left Cairo International Airport today at the beginning of a new pastoral visit for a number dioceses in Europe starting in France. The center said in a statement that Pope arrived at Charles de Gaulle airport in the French capital Paris where he was received by Egyptian Ambassador to France Ehab Badawi and Ambassador Sherif Diwani, Consul General.

Dr. Khaled Abdel Ghaffar, Minister of Higher Education, received on Tuesday His Holiness Pope Tawadros II at Helwan University to be honored by the University as one of the most important Egyptian figures. Dr. Majid Najim, head of the university, handed over the honor shield to the Pope while attending the ceremony. 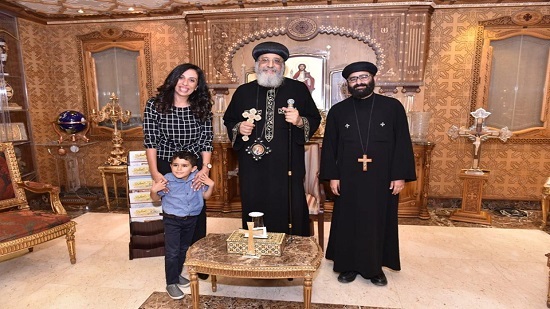 Coptic Church mourned today priest Domadious Kozman of St. Parsoum monastery in Helwan. The priest died at the age of 75 after spending more than 33 years as priest. Pope Tawadros II and Bishpo Besenti of Helwan offered their sincere condolences for the departure of the reverend priest. 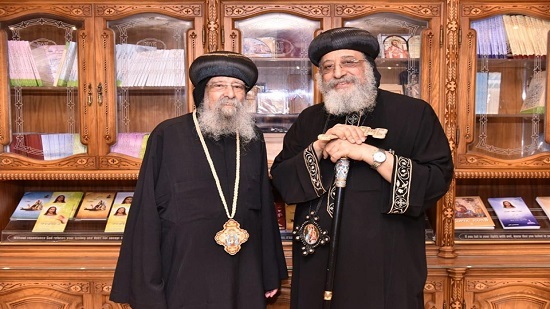 His Holiness Pope Tawadros II, Pope of Alexandria and Patriarch of St. Mark See, received on Tuesday priests and the council of the Church of St. George and St. Anthony in Heliopolis. The council discussed their plans to serve the congregation and especially the youth, and they asked the Pope to ordain new deacons for the ministry in the church. 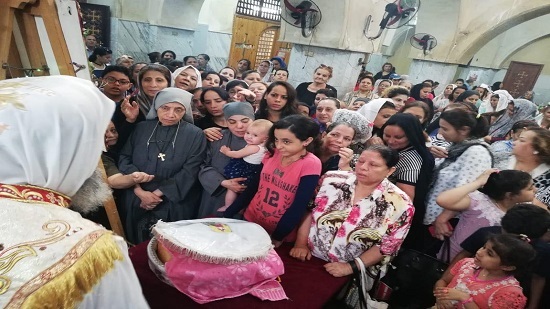 Bishop of Helwan heads the feast of St. Parsoum the Naked

Media office of the Coptic Orthodox Church said that Bishop Bisanty of Helwan presided this morning the Holy Mass of the feast of St. Parsoum at his shrine in the monastery of St. Parsoum in Helwan. Hundreds of the congregation and dozens of clergy have also pariticapted in the celebration. 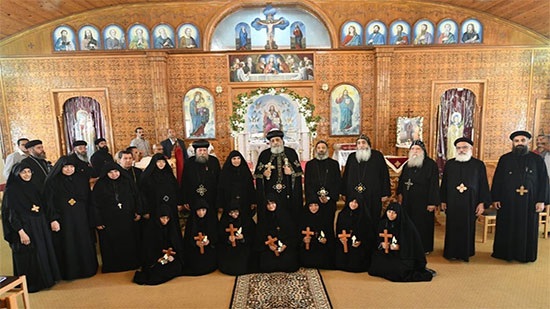 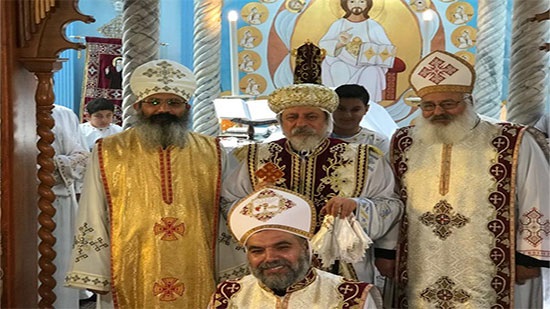 A new priest ordained in Sidney

Bishop Daniel of Sydney ordained a new priest at church of St. Demiana and St. Athanasius in Punchbowl, Sidney. The priest is Father Geroge Nakhil and is responsible for St. Mark Coptic Church in Sidney.

A group of International Youth delegation welcomed Pope Tawadros before his weekly sermon at Archangel Michael church in King Mariout. The meeting was attended by many bishops and clergy of the Coptic church. 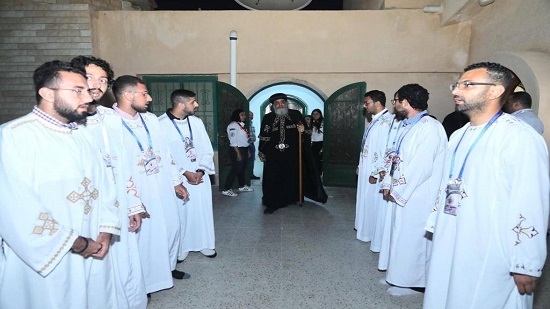 26000 people attend the carnival in his image in Qusiya

Media Center of the Coptic Church announced the conclusion of the Carnival ‘in his image’ that was held for 4 days. It was organized by the Biblical House of Egypt for the third year in the Diocese of Qusiya and Mir. The Carnival was attended by 26000 people from the diocese and nearby cities and was blessed by the presence of Bishops Tomas of Qusiya and Thofilis of Manfalout.

Last Tuesday, the former President of Egypt, Hosi Mubarak, died at the age of 92. The man who served his country for many years as leader of the Air forces, vice president and president of the republic from 1981 to 2011 deserved to receive a military funeral. Egypt shall remember what he did including all good and bad things. It is understood that history doesn’t know angels or devils, but human beings who comm