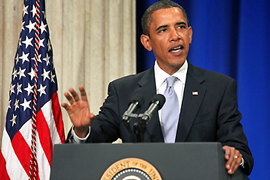 The report warns that unless action is taken there is a danger that a financial collapse will happen again
A year after the US investment bank Lehman Brothers collapsed, helping to trigger the global financial downturn, a UK-based think-tank has warned that policymakers have failed to address the problems at the root of the crisis.

The Institute for Public Policy Research (IPPR) said the rapid return of the bonus culture in Britain shows that real reform to the way that economies and financial markets work has been "very limited".

Tony Dolphin, the report's author, said: "Alarm bells should be ringing with the early signs of a 'back to business' attitude in the City and little evidence that policymakers are taking measures to ensure the next economic recovery is better balanced than the last one."

The document, entitled How to Make Capitalism Better, warns that unless urgent action is taken there is a real danger that it may not be the last crisis of its type.

The think-tank argues that reforms should include greater international co-ordination of economic policies in the world's major economies, with countries such as China and India given a larger role in bodies like the International Monetary Fund.

It also calls for "a financial system that operates for the benefit of the whole economy, not just in its own narrow, short-term interests - which will require increased regulation, preferably based on internationally agreed principles".

Focusing on the UK, it says economic growth should be based more on exports and investment and less on debt-fuelled consumption.

This would "require the government to be active in addressing market failures in innovation, training, infrastructure and finance".

The report's themes pick up on a similar warning from Barack Obama, the US president, in a speech to Wall Street on Monday.

Obama warning
Obama said that while a $787bn package to prop up the country's ailing economy had worked, he remained concerned that some financial institutions are still acting irresponsibly.

"Unfortunately, there are some in the financial industry who are misreading this moment," the president said in New York.

"Instead of learning the lessons of Lehman and the crisis from which we are still recovering, they are choosing to ignore them.

"The old ways that led to this crisis cannot stand. And to the extent that some have so readily returned to them underscores the need for change and change now. History cannot be allowed to repeat itself.

Gaps in the regulation of US banks and capital markets have been widely blamed for the subprime mortgage crisis and the global financial chaos triggered after Lehman Brothers' collapse.

Obama's regulatory efforts since taking office - which include plans to give the US Federal Reserve new powers to monitor big financial firms and allow the government to seize and liquidate them when they fall into trouble - have hit resistance in congress.

In recent weeks, economic indicators have suggested that things are looking up in the US economy following the $787bn stimulus plan, which was touted as a way to save up to 1.1 million jobs.

Officials are predicting a possible return to positive economic growth in the third quarter of this year, a moment that will mark a political milestone for the administration.

Though the White House insists the gains mean its policies are working, officials admit there is still economic pain to come, predicting that even in recovery, unemployment will hit 10 per cent.