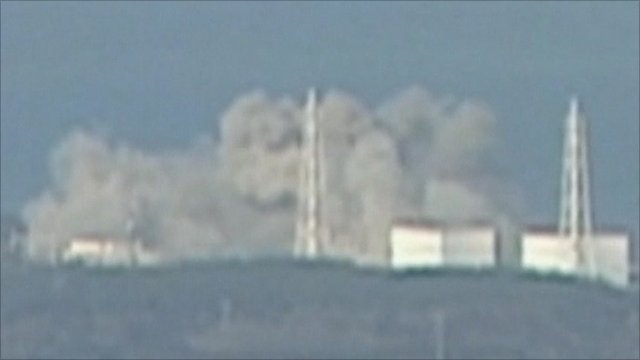 A huge pall of smoke was seen coming from the plant at Fukushima and several workers were injured.
Japanese officials say the container housing the reactor was not damaged and that radiation levels have now fallen.
A huge relief operation is under way after the 8.9-magnitude earthquake and the tsunami it triggered, which is thought to have killed at least 1,000.
The offshore earthquake triggered a tsunami which wreaked havoc on Japan's north-east coast, sweeping far inland and devastating a number of towns and villages.
Japan's Prime Minister Naoto Kan declared a state of emergency at the Fukushima Daiichi and Daini (also known as Fukushima 1 and 2) power plants as engineers try to confirm whether a reactor at one of the stations has gone into meltdown.
The emergency declaration is an automatic procedure after nuclear reactors shut down in the event of an earthquake, allowing officials to take rapid action.
Evacuation zone expanded
Television pictures showed a massive blast at one of the buildings of the Fukushima-Daiichi plant, about 250km (160 miles) north-east of Tokyo.
A huge cloud of smoke billows out and large bits of debris are flung far from the building.
Japan's NHK TV showed before and after pictures of the plant. They appeared to show that the outer structure of one of four buildings at the plant had collapsed after the explosion.
The Tokyo Electric Power Co (Tepco), the plant's operator, said four workers had been injured.
It is not yet clear in exactly what part of the plant the explosion occurred or what caused it.
The Japanese government's chief spokesman, Yukio Edano, said the metal container around the reactor was not damaged in the explosion and that radiation levels in the area had actually decreased after the blast.
Officials ordered the evacuation zone around the plant expanded from a 10km radius to 20km. BBC correspondent Nick Ravenscroft said police stopped him 60km from the Fukushima-Daiichi plant.
Japan's nuclear agency said earlier on Saturday that radioactive caesium and iodine had been detected near the number one reactor of the power station.
The agency said this could indicate that containers of uranium fuel inside the reactor may have begun melting.
Air and steam, with some level of radioactivity, was earlier released from several of the reactors at both plants in an effort to relieve the huge amount of pressure building up inside.
Mr Kan said the amount of radiation released was "tiny".
Cooling system failure
Nuclear reactors at four power plants in the earthquake-struck zone automatically shut down on Friday.
In several of the reactors at the two Fukushima plants the cooling systems, which should keep operating on emergency power supplies, failed.
Without cooling, the temperature in the reactor core builds, with the risk that it could melt through its container into the building housing the system.
Pressure also builds in the containers housing the reactor.
Tepco said it was pumping water into the Fukushima-Daiichi's number one reactor in a bid to cool it down.
The reactors the plant are Boiling Water Reactors (BWR), one of the most commonly used designs, and widely used throughout Japan's array of nuclear power stations.
Analysts say a meltdown would not necessarily lead to a major disaster because light-water reactors would not explode even if they overheated.
But Walt Patterson, of the London research institute Chatham House, said "this is starting to look a lot like Chernobyl".
He said it was too early to tell if the explosion's aftermath would result in the same extreme level of radioactive contamination that occurred at Chernobyl.
The explosion was most likely caused by melting fuel coming into contact with water, he told the BBC.
The 8.9-magnitude tremor struck in the afternoon local time on Friday off the coast of Honshu island at a depth of about 24km, 400km (250 miles) north-east of Tokyo.
It was nearly 8,000 times stronger than last month's quake in New Zealand that devastated the city of Christchurch, scientists said.
Some of the same search and rescue teams from around the world that helped in that disaster are now on their way to Japan.
As relief workers begin to reach the earthquake zone, the scale of the damage is being revealed.
One of the worst-hit areas was the port city of Sendai, in Miyagi prefecture, where police said between 200 and 300 bodies were found in one ward alone.
The town of Rikuzentakada, in Iwate prefecture, was reported as largely destroyed and almost completely submerged. NHK reported that soldiers had found 300-400 bodies there.
Chief government spokesman Yukio Edano said it was believed that more than 1,000 people had died.
A local official in the town of Futuba, in Fukushima prefecture, said more than 90% of the houses in three coastal communities had been washed away by the tsunami.
Looking from the fourth floor of the town hall, I see no houses standing,'' Kyodo news agency quoted him as saying.
Tweet
Pope Shenouda Article