Arbitration my be sought on Nile 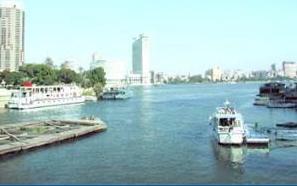 Egypt would not abandon its legal and historical right to Nile waters, local media quoted Minister of Water Resources and Irrigation Hussein el-Atfi as saying Saturday.

“Resorting to international arbitration is a final step to preserve our rights,” the Minister said.
Under the original deal signed in 1891 by the Nile Basin states, Egypt (where the Nile flows into the Mediterranean) was entitled to 55.5 billion cubic metres of water a year.
But Burundi, Kenya, Uganda, Ethiopia, Tanzania and Rwanda have recently signed a new pact to re-distribute the Nile’s water. Sudan and the Democratic Republic of Congo have not signed yet, although Kenya stated last year that it expected Congo to come on board.
“The new pact won’t reduce Egypt’s share,” el-Atfi claimed. “Our Government will co-operate on development projects with Nile Basin countries.”
Egypt is already threatened by climate change and almost entirely dependent on the Nile and its waters and apprehensively watches the hydro-electric power dam projects taking shape in upriver African nations.
Tweet
Pope Shenouda Article