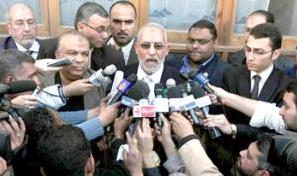 CAIRO, Egypt - Egypt's Muslim Brotherhood, the country's best organised movement, on Saturday announced the formation of a party to contest up to half of parliament's seats in a September election.

Mohammed Hussein, the group's secretary general, said at a news conference that the movement's consultative council decided at a meeting to adopt a decision to form the new Freedom and Justice Party.
"We have adopted the measures taken by the guidance council regarding the Freedom and Justice Party and adopted its programme," he said.
He said the party, which will be headed by the Brotherhood's politburo member Mohammed al-Mursi, will be "independent from the Brotherhood but will coordinate with it."
The party will contest only between 45 and 50 percent of seats in an upcoming election in September, the first since a popular revolt in February ousted president Hosni Mubarak.
The Brotherhood ran its candidates as independents in previous elections to circumvent a ban on the group in place since 1954.
It won a fifth of seats in a 2005 election, but fared much worse in a November 2010 election that was widely seen as rigged to favour the former ruling National Democratic Party.
The Brotherhood has sought to allay suspicions fears of an Islamist parliamentary majority and said it would be willing to cooperate with secular groups in upcoming election, while pledging not to field a presidential candidate for a November poll.
Mursi said at the new conference, held in the movement's new headquarters in the hilly Muqattam district, that the party was not "theocratic."
"It is not an Islamist party in the old understanding, it is not theocratic," said Mohammed al-Mursi, who was appointed head of the Freedom and Justice Party.
"It is a civil party," he said at a press conference.
Egypt's constitution bans parties based on religion, class or regionalism.
Tweet
Pope Shenouda Article