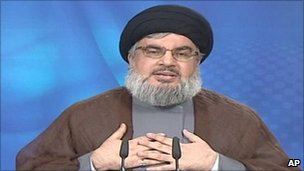 Hezbollah leader Hassan Nasrallah has rejected indictments of four of its members over the 2005 assassination of Lebanon's former PM, Rafiq Hariri.

He also said no power would be able to arrest the "honourable brothers", who have not yet been named officially.
It was his first reaction to the indictments issued by the Special Tribunal for Lebanon (STL) on Thursday.
The Shia Islamist movement has repeatedly denounced the UN-backed tribunal and vowed to retaliate.
Rafik Hariri and 22 others were killed in February 2005 in central Beirut when a huge bomb went off near his motorcade.
Hariri's son, Saad, welcomed the indictments and described them as a "historic moment" for Lebanon.
'Israeli plot'
In a televised speech on Saturday, Sayyed Nasrallah rejected "each and every void accusation" made by the STL, saying it was tantamount to an attack on the group.
He said the four group members were brothers "who have an honourable history in resisting Israeli occupation".
"They cannot find them or arrest them in 30 days or 60 days, or in a year, two years, 30 years or 300 years," he added. "What will happen is a trial in absentia, a trial in which the verdict has already been reached."
Sayyed Nasrallah went on to describe the STL as full of "financial and moral corruption", and part of an Israeli plot.
"Do you expect this tribunal to be fair with resistance fighters who fought against Israel?" he asked. "This tribunal, since the beginning, was formed for a clear political target."
He displayed documents purporting to show that when the tribunal was transferring equipment from Lebanon to The Hague in 2009, it sent a consignment of 97 computers via Israel.
But the Hezbollah leader also urged people to stop worrying about the potential for conflict, saying the tribunal's indictments would not "drag Lebanon towards strife or civil war".
"This is because there is a responsible government in Lebanon that will not act with revenge," he explained.
Immediately following the speech, bursts of celebratory gunfire and fireworks erupted in Beirut.
On Thursday, State Prosecutor Saeed Mirza said he had received the indictments and four arrest warrants from an STL delegation in Beirut.
The STL later confirmed the indictments, stating that the judge "is satisfied that there is prima facie evidence for this case to proceed to trial".
It added that it would not reveal the identities of those indicted.
However, Interior Minister Marwan Sharbil has told the AFP news agency that the names of the men charged are Mustafa Badr al-Din, Salim al-Ayyash, Assad Sabra and Hassan Unaisi.
Mr Badr al-Din was jailed in Kuwait over a series of bombings in 1983, and is a brother-in-law of the late top Hezbollah military commander, Imad Mughniyeh, who was assassinated in a 2008 bombing in Damascus.
Leaks from the tribunal suggest it is mainly relying on mobile phone evidence to accuse the Hezbollah members, the BBC's Owen Bennett-Jones in Beirut reports.
The Lebanese authorities now have 30 days to arrest the four men, but with Hezbollah being a strong force within the government, no-one is expecting them to do so, our correspondent adds.
Tweet
Pope Shenouda Article