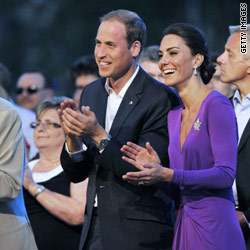 Montreal (CNN) -- Anti-monarchy protesters are expected to demonstrate Sunday at Quebec City Hall as Prince William and his wife Catherine begin the next phase of their Canadian tour.

On Saturday evening, the Duke and Duchess of Cambridge arrived in Montreal to a small group of demonstrators who opposed the newlywed couple's tour and the British monarchy they represent.
The demonstrators -- carrying signs and chanting slogans -- were among the first groups to oppose the visit by William and Catherine, who are on their first official foreign trip as a married couple.
Canada is part of the Commonwealth of Nations -- a loose association of nations that were once part of the British Empire.
The couple's Sunday plans include a morning prayer, during which they will join the crew of the naval ship HMCS Montreal in worship.
Later Sunday, the duke and duchess will visit Maison Dauphine, which provides assistance to troubled street youth in Quebec.
William and Catherine will also attend a "Freedom of the City" ceremony at Quebec City Hall and a city of Levis community celebration.
At the end of their day in Quebec City on Sunday, the royal couple will head to Prince Edward Island for the next leg of their four-province, nine-day. There, Prince William will take part in a coast guard rescue exercise.
On Saturday, William and Catherine were in Ottawa, wrapping up their last official day there by planting a tree and meeting with Canadian war veterans.
The royal couple joined a long list of illustrious international visitors when they ceremonially planted a Canadian hemlock on the grounds of Rideau Hall.
They then greeted veterans of conflicts and peacekeeping missions, including some who have served in Afghanistan, and representatives of the many British women who migrated to Canada to start a new life after World War II.
Later on Saturday, the pair traveled to French-speaking Quebec province, where they toured a flagship Montreal hospital dedicated to the care of mothers and children.
Canadian broadcaster CBC reports that Quebec's relationship with the monarchy has often been strained, with the Queen met by booing protesters on a visit to the province in 1964.
Prince William and the duchess had received a largely warm welcome since arriving in Ottawa Thursday. They had joined a crowd of almost 300,000 Canadians Friday to mark the celebration of Canada Day, on the 144th anniversary of the country's independence.
The couple's itinerary also includes stops in the Northwest Territories and Alberta.
After they wrap up their Canadian tour, the duke and duchess will head to California for three days.
Tweet
Pope Shenouda Article