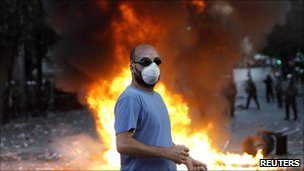 Eurozone finance ministers have approved the latest tranche of emergency help for the Greek economy.
They will release 12bn euros (£10.4bn, $17.4bn) in the next two weeks to help Greece meet spending commitments and avoid defaulting on its huge debts.

Earlier this week, the Greek parliament passed tough austerity measures demanded by the European Union and International Monetary Fund.
MPs backed the measures despite angry protests on the streets of Athens.
The EU and IMF have already agreed to provide Greece with a total of 110bn euros in emergency loans, with eurozone finance ministers discussing the details of a second bail-out designed to help Greece pay its debts until the end of 2014.
Greek Finance Minister Evangelos Venizelos welcomed the eurozone move, saying it "strengthened the country's international credibility".
He added: "What is crucial now is the timely and effective implementation of the decisions taken in parliament, so we can gradually emerge from the crisis in the interest of national economy and the Greek citizens."
'Breathtaking'
Earlier on Saturday, Polish Finance Minister Jacek Rostowski criticised Europe's handling of the Greek debt crisis.
He suggested that too much emphasis had been put on austerity measures and not enough on growth.
And he accused opposition parties in some unnamed eurozone countries of showing "breathtaking short-sightedness" in their opposition to support for Greece.
His comments come after Poland took over the six-month presidency of the European Union (EU) on Friday.
Mr Rostowski will now chair meetings of EU finance ministers, and hopes to join talks among eurozone finance ministers - even though Poland has not adopted the euro as its currency.
Tweet
Pope Shenouda Article