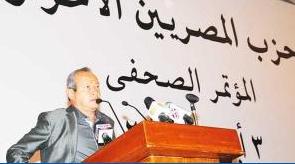 “The Free Egyptians Party appeals to its members to be wary of certain enemies of the revolution who have managed to creep into the party, as well as other parties or [political] currents, seeking to destroy the party, which has achieved a wide popular base in a short time,” the party said in a statement. It also denounced all attempts to confine the whole party in ‘one person’, in spite of the fact that the “Free Egyptians Party is a party for all Egyptians”. The Free Egyptians Party stressed in the statement respect for all religions and their role in Egypt, as well as the “religious choices of the Egyptian people, based on a strong belief in freedom of religion”. The statement called upon all the party members to be wary of ‘lies’ designed to fuel sedition among Egyptians. It also warned of deterrent measures to be applied against those who have crept into the party to provoke sedition among the members. The founder of the party, business mogul Naguib Sawiris, has been at the centre of controversy in the past few days over a cartoon of Mickey Mouse with an Islamic beard, dressed in a short galabiya, and another of Minnie Mouse, with her face veiled, that appeared on the social networking website Twitter. Being repeatedly attacked for posting the cartoon, Sawiris wrote on Twitter: “I apologise to anyone, who didn’t take this as a joke. I just thought it was a funny picture, no disrespect meant!” The next day, he repeated the apology on Twitter, saying: “I at least apologised as I had no intention to mock any religion.” In spite of this, 14 Islamist lawyers, spearheaded by Mamdouh Ismail, who is leading the efforts to form a Salafist fundamentalist party, last week filed a complaint with the Public Prosecutor against the telecom tycoon, because they found the poster offensive. "The images were very offensive and ridiculed the Islamic faith. That's why we have complained to the Public Prosecutor about Sawiris," Ismail said. He added that they aren’t suing Sawiris because he is a Coptic Christian.