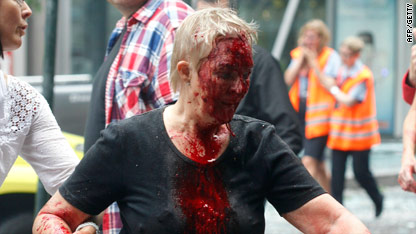 Oslo, Norway (CNN) -- The death toll in the mass shooting and bomb attack in Norway rose to 92 Saturday, as leaders and the public alike tried to make sense of what the prime minister called the country's "worst atrocity" since World War II.

New details emerged surrounding Friday's attacks, as a fuller picture of the suspect charged in the crimes came to light. The man faces charges related to terrorism, which carry a maximum sentence of 21 years in prison if convicted. The charges may change, police said.
Norwegian television and newspaper reports have identified the suspect as 32-year-old Anders Behring Breivik.
An employee at a Norwegian agricultural cooperative told CNN that the man identified in media reports as the suspect bought six tons of fertilizer from her company in May.
Oddmy Estenstad, of Felleskjopet Agr, said she did not think the order was strange at the time because the suspect has a farm, but after Friday's explosion in Norway's capital, Oslo, she called police because she knew the material can be used to make bombs.
"We are very shocked that this man was connected to our company," said Estenstad. "We are very sad about what happened."
Official sources and social media indicate that Breivik might be a right-wing Christian fundamentalist who may have had an issue with Norway's multi-cultural society. The attack may have been politically motivated, one official said.
"I think what we have seen today is that politically motivated violence poses a threat to society and I commend the police for carrying out a very swift and effective investigation, but that is still ongoing," Foreign Minister Jonas Gahr Store told reporters.
Police have not officially released the identity of the suspect, telling reporters only that they detained a 32-year-old Norwegian man who is being questioned in both the Oslo bombing -- which left seven dead and more than 90 wounded -- and the shooting attack at the youth camp on Utoya island, in which 85 people were killed.
The suspect was cooperating with police, making it clear he wanted to explain himself, Roger Andresen, a deputy police chief, told reporters during a news conference.
Prime Minister Jens Stoltenberg did not rule out the possibility that there was more than one person involved in the attacks.
Indeed, a second person was arrested Saturday in a hotel where the prime minister was due to meet families of the victims of the attack, police said. He was carrying a knife, state-run broadcaster NRK reported.
Stoltenberg said later Saturday that many world leaders had reached out to him after the tragedy. "The world is with Norway at the moment. That will not restore the lives lost, of course, but it gives support and they hope it will help in their grief," he said.
The prime minister said it's too early to tell how the massacre will change Norwegian society.
"But I hope we will maintain" the things that make us unique, Stoltenberg said.
Together with Norway's king, queen and crown prince, Stoltenberg visited with victims' family members and survivors of the attacks at a hotel.
Seven people were killed in Friday's explosion in the Norwegian capital, officials said. In all, 90 people were hospitalized as a result of the blast, said Erik Hansen, a spokesman for Oslo Mayor Fabian Stang.
It was while authorities were searching for survivors of the mid-afternoon bombing that a man wearing a police uniform and identifying himself as an officer arrived by boat at Utoya island, about 20 miles from Oslo, where word was spreading among the campers about the explosion in the capital, said Adrian Pracon, a survivor of the mass shooting.
The man asked to address the group, and then started shooting.
What followed, Pracon says, was panic and chaos as some campers ran from the shooter, while others went toward the man because they believed it was a drill or a test.
Pracon said the shooter chased people to the shore, screaming at them as he fired.
An elite police unit took the gunman into custody on the island, Andresen said. The man did not put up a fight during his arrest, he said.
Authorities were searching the waters Saturday around Utoya, looking for the bodies of campers who may have drowned trying to swim to safety, police said.
"This happened at a place where I, in my young side, became politically active and I said earlier today it was a paradise for youngsters and yesterday it was turned into a hell. We have to regain this. Nobody's going to take this away from us," Stoltenberg said.
The suspect matched the description of a person who was seen near the government buildings in Oslo shortly before the bombs erupted, police said.
The acting national police chief, Sveinung Sponheim, told reporters in Oslo that the gun used to shoot the campers was an automatic weapon and that undetonated explosives were found on the island after the attack.
Tweet
Pope Shenouda Article