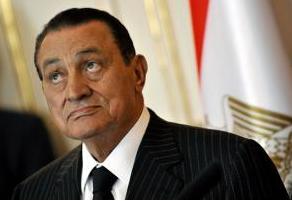 CAIRO - The trial of former president Hosni Mubarak, his interior minister and his two sons, as well as a fugitive businessman, is due to start on Wednesday in Cairo's Police Academy in New Cairo, which was once named after the ousted leader who ruled Egypt for 30 years, the head of Cairo's Court of Appeals has said.

"It was been decided that the trial of Mubarak, his sons Gamal and Alaa, former interior minister Habib el-Adli and businessman Hussein Salem will be in the Police Academy," said Judge el-Sayyed Abdel-Aziz Omar.

The announcement contradicted a statement made by the Assistant Minister of Justice last Thursday, who said the trial would be held in Nasr City Fairgrounds in Cairo.

"Ahmed Fahmi Refaat, the judge in charge of the trial, will hold a news conference in the Supreme Court on Sunday, to unveil the arrangements for the press attending the trial," Omar was quoted by the official Middle East News Agency (MENA) as saying.

However, he did not say whether the 83-year-old Mubarak, who is detained in a hospital in the Red Sea resort city of Sharm el-Sheikh, will attend Wednesday's session.

Nor did he say whether Mubarak, accused of ordering the killing of protesters and corruption, will be flown back to Sharm el-Sheikh Hospital after the session (if indeed he attends it) or be transferred to a prison hospital.

Omar, who did not give reasons for the trial being transferred to the Police Academy, pointed out that Interior Minister Mansour el-Eissawi is helping to facilitate the attendance of media staff, lawyers and the families of the martyrs.

Health Minister Amr Helmi had announced on Thursday that Mubarak was fit to be transferred to Cairo for trial.

However, a medical source in Sharm el-Sheikh Hospital said the former president’s health is deteriorating.

"Mubarak is stable. But he is very depressed and refuses to co-operate with psychiatrists," the source added.

A security source in South Sinai Governorate, where Sharm el-Sheikh is located, denied the police department had received any instructions to move Mubarak to Cairo.

"But we do have a plan to move him, in case we have to," he stressed.

A human rights team, which yesterday visited a prison where Mubarak's two sons are jailed, reported that members of the former regime are not receiving special treatment.

"We visited Torah Prison upon the request of the Bar Association's Freedom Committee, after receiving the approval of the Prison Authority," said Hafez Abu Seda, a member of the team.