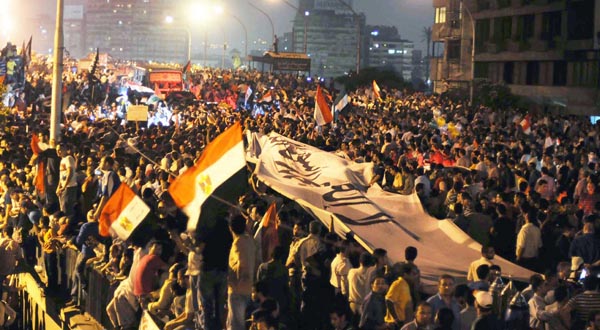 CAIRO: A lone protester became a hero to an exultant crowd of Egyptians and many more online by hauling down the Star of David flag atop Israel's embassy in Cairo after the border killing of Egyptian policemen.

More than 1,000 protesters gathered outside the Israeli embassy early Sunday and let off celebratory fireworks when the man clambered to the top floor of a high-rise housing the mission, replacing the flag with an Egyptian one.
Egypt's cabinet said an Israeli statement expressing regret for the deaths of the policemen was not enough, but stopped short of saying if it would recall its envoy from Tel Aviv.
Tensions between the Jewish state and the most populous Arab nation have surged since the deaths on Thursday of the police officers, which occurred as Israeli troops pursued militants responsible for deadly attacks near Eilat.
It represents the most serious test of Israel's landmark 1979 peace treaty with Egypt since an uprising overthrew Egyptian leader Hosni Mubarak in February.
Egypt's military rulers and caretaker cabinet are under populist pressure to take a firm stand.
The man who took down the flag, identified as Ahmed El-Shehat, was led away by protesters after he descended, but not before some tore up the Israeli flag he carried down with him and kept bits as souvenirs.
Other demonstrators burnt Israeli and US flags.
El-Shehat became an instant idol with one Egyptian presidential candidate, Hamdeen Sabahi, hailing him as "the people's hero" on Twitter.
Shehat was labeled the "Egyptian Spiderman" and "Flagman" on Twitter and he trended rapidly on the social networking site as Egyptians and others worldwide expressed their admiration for his stunt.
"This is for Palestine. This is for Egypt. This is for every Arab. This is for every free person," one Twitter user posted.
"Forget Spiderman, Batman, or Superman. My kids are going to grow up wanting to be like FlagMan," wrote another.
In telephone call to a television station, El-Shehata said he felt "indescribable happiness" after the risky feat.
"This is something perhaps more than a billion Arabs long to do, to tear up the Israeli flag," he told Al-Jazeera Mubashir Misr, the Qatar-based broadcaster's Egyptian affiliate.
"We want to expel people who are killing us. Those Jews and Zionists are part of the old regime, and we want to cut all our ties with the old regime," he said.
He said he managed to sneak to a lower, adjacent building as soldiers and policemen were changing guard and then climbed up to the embassy's flagpole.
In footage aired by the station, a man could be seen climbing to the flagpole to exchange flags.
Military police in riot gear stood outside the embassy building but did not intervene to halt the protest. Two military police generals walked into the crowd to try to calm the demonstrators.
"Look, what happened is Israeli soldiers were chasing some gunmen on the border, they opened fire and hit our men by mistake. That's all there is to it. They didn't enter our territory," said one of the generals.
But they were rebuked by the protesters, who demanded that the military take a firmer stand against Israel. Hundreds of protesters remained outside the embassy on the Nile River as dawn broke over Cairo.
Egypt's cabinet insisted on a firm timetable to execute an Israeli offer of a joint investigation into the border deaths, according to the state news agency MENA.
"The Israeli statement was positive on the surface, but it was not in keeping with the magnitude of the incident and the state of Egyptian anger toward Israeli actions," a cabinet statement said.
"Egypt affirms its solicitude for maintaining peace with Israel, but Israel must also assume responsibility for protecting this peace," it added.
On Saturday afternoon, the foreign ministry summoned Israel's charge d'affaires for a reprimand.
The envoy, who answered the summons because the ambassador was outside the country, read out a statement by Israeli Defense Minister Ehud Barak expressing regret for the deaths and offering a joint probe, Egypt's foreign ministry said.
Egyptian state television had reported earlier that Egypt would recall its ambassador from Tel Aviv. But Israel said it had received no notification of the decision.
Israeli officials accused Palestinian militants in Gaza, which also borders Egypt, of planning the attack and carrying it out after slipping into the Negev desert from Egyptian territory.
Egypt has denied the gunmen used its territory and bristled at suggestions that it had lost control of the Sinai peninsula, where its military has been conducting a week-long operation to root out Islamist militants.
Tweet
Pope Shenouda Article