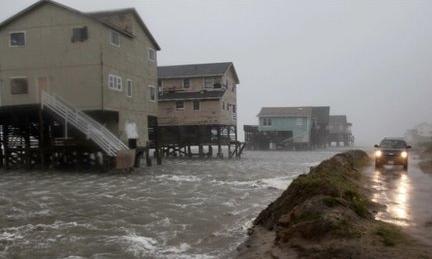 Ocean City, Maryland (CNN) -- After slamming into the East Coast and knocking out power to almost 2 million people, Hurricane Irene is now taking aim at the biggest cities in the Northeast.

Irene pummeled Ocean City, Maryland, early Sunday while en route to New York City, threatening to flood parts of Manhattan and bring the bustling city to a virtual standstill.
Ocean City appeared to have endured the blows.While the storm dumped 11 inches of rain by early morning, there was no major flooding.
Some ections of the city were without power, and officials stopped sending vehicles to respond to 911 calls after winds topped 50 mph, said Bob Rhode of the city office of emergency management.
With the exception of an extreme, catastrophic event, "No one goes out. No one moves," Rhode said.
In New York, streets in "the city that never sleeps" looked barren and desolate as residents braced for the full brunt of Irene.
Throughout the city, shelves upon empty shelves greeted last-minute shoppers at stores. Caution tapes barricaded the turnstiles at subway stops.
Allysia Matthews and her husband holed up in their Manhattan apartment Sunday morning.
"The streets in general tend to start flooding" during rainfall, Matthews said. "We've been staying at home because there's really no way to get around."
By 5 a.m. ET Sunday, Irene was about 15 miles south-southeast of Atlantic City, New Jersey, and about 115 miles south-southwest of New York City early Sunday, according to the National Hurricane Center. It was moving north-northeast at 18 mph and carried maximum sustained winds of 75 mph.
Powerful gusts were so strong that pedestrians struggled to stay upright. Storm surges along the East Coast turned at least one beach into an extension of the ocean.
A nuclear power reactor in Calvert Cliffs, Maryland, automatically went offline late Saturday after a piece of aluminum siding from a building struck a transformer amid strong winds.
"The facility is safe; there is no impact to employees or our neighbors," said Mark Sullivan, spokesman for the Constellation Energy Nuclear Group. "There is no threat."
In New Jersey, ferocious winds blew tree branches horizontally. George Nikolis of Jersey City insisted on riding out the storm .
"You only see something like this maybe once every 25 years, and I wanted to be here to capture this historic moment," Nikolis said.
Officials have blamed at least 10 deaths on Irene.
Five people died as a result of the storm in North Carolina, and three were killed in Virginia due to falling trees, emergency officials said.
A 55-year-old male surfer died around noon in New Smyrna Beach, Florida, and a woman in Queenstown, Maryland, died after a tree knocked a chimney through the roof of her home, officials said.
Irene made landfall Saturday in North Carolina near Cape Lookout at the southern end of the Outer Banks. It stomped across the state for most of the day.
It ripped off roofs, toppled trees, induced "massive flooding" near the coast and brought down power lines statewide, according to the state emergency management division.
The hurricane unleashed 10 to 14 inches of rain over much of North Carolina and pushed a 4-foot storm surge into the Chesapeake Bay, the National Hurricane Center said.
As of midnight Saturday, Kill Devil Hills, North Carolina, had endured 31 hours of nonstop rainfall.
Reports of tornadoes came from several states, including North Carolina and Virginia -- but a final determination will have to be made by the National Weather Service.
The weather agency issued tornado watches -- indicating favorable conditions for a tornado to form, even when one hasn't been reported yet -- through Sunday morning for several areas, including New Jersey and New York City.
But Irene's fury is less about wind speed as it is about rainfall and flooding.
The storm is a Category 1 hurricane -- meaning maximum sustained winds are less than 95 mph. But residents on the East Coast are now dealing with torrential rainfall and the possibility of Irene hurling walls of ocean water onto land.
"It's pretty tough, honestly," Delaware Gov. Jack Markell said of conditions Saturday night. "So far, it's still early for us and it's already hitting us pretty hard."
The storm is also wreaking havoc on transportaton in several major cities.
Boston, New York, Philadelphia, Baltimore and New Jersey have suspendedall transit service, with no subway and bus service on Sunday. And the Philadelphia International Airport will remain closed until at least 4 p.m. Sunday, airport spokeswoman Victoria Lupica said.
In New York -- where the city ordered the unprecedented evacuation of 370,000 people from low-lying areas on Friday-- even residents who aren't being ordered to leave could face an arduous few days following Irene's tour of the city.
New York's transit system might not be fully running again until at least Monday, high-rise buildings are being instructed to turn off elevators and utility ConEd may have to cut power to Manhattan, Mayor Michael Bloomberg said.
"This is a storm where, if you're in the wrong place at the wrong time, it can be fatal," he warned.
Tweet
Pope Shenouda Article