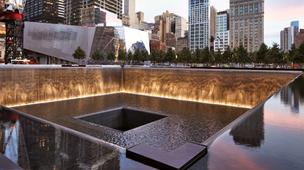 As the tenth anniversary of the tragedy of September 11 arrives, a number of sites, many in Lower Manhattan, are open to visitors who wish to better understand the events of that day and their aftermath, and to honour those who lost their lives in the attacks.

Related slideshow: Building the Twin Towers: A tribute
Perhaps the most long-awaited of these sites is the National September 11 Memorial, which will be dedicated on 11 September in a ceremony slated to be attended by President Barack Obama and other officials. Starting 12 September, the memorial will be open to the public.
In the heart of the new World Trade Center (WTC) site, with an entrance at the corner of Albany and Greenwich streets, the 9/11 Memorial consists of two pools of water, almost one acre each, set within the original footprints of the World Trade Center’s twin towers. Thirty foot-high waterfalls cascade down the pools’ sides and hundreds of swamp white oak trees surround the pools. Inscribed on bronze panels around the waterfalls’ edges are the names of the 2,982 men, women and children killed at the World Trade Center, the Pentagon in Virginia and at the plane crash near Shanksville, Pennsylvania, on 11 September, 2001, as well as at the World Trade Center on 26 February, 1993, when it was first attacked.
When a jury selected the memorial designs of architect Michael Arad and landscape architect Peter Walker in 2004, it articulated the selection this way: “By allowing absence to speak for itself, the designers have made the power of these empty footprints the memorial… The surrounding plaza’s design has evolved to include beautiful groves of trees, traditional affirmations of life and rebirth… They remember life with living forms, and serve as living representations of the destruction and renewal of life in their own annual cycles.”
Starting 12 September, 2011, the National September 11 Memorial will be open to the public, day and night, by timed, advance reservation only. The museum, whose entrance will be next to the memorial, will open September 2012.
The memorial also has a preview site, at 20 Vesey Street, with exhibits, including a Statue Of Liberty replica covered with flags, mass cards and other tributes; a listening station where visitors can hear people describe their 9/11 experiences; and a recording booth, where visitors can record their own 9/11 stories.
Other 9/11-related places range from houses of worship to gardens, parks and museums; many are holding special events on or before 11 September to commemorate the tenth anniversary.
The Tribute WTC Visitor Center, a project of the September 11th Families’ Association, is located at 120 Liberty Street, across from the WTC site. Its exhibits look at the neighbourhood, describe the attacks and the rescue and recovery process after 9/11, display photographs and memorabilia of people who died in the attacks, and discuss worldwide volunteer efforts since that time. The center also offers daily walking tours alongside the WTC site.
The annual Tribute in Light, presented by the Municipal Art Society, will start at dusk on 11 September and be on display through dawn on 12 September. First presented on 11 March, 2002, and shown annually on 11 September ever since, the tribute consists of 88 7,000-watt xenon light bulbs placed on a roof near the WTC site in two 48-foot squares that echo the shape and orientation of the twin towers. Climbing four miles high, the illuminated memorial is the strongest shaft of light ever projected from Earth into the night sky; it is visible within a sixty-mile radius on a clear night.
St Paul’s Chapel opened in 1766 at Broadway and Fulton Street (what is now across from the WTC), making it the oldest public building in continuous use in Manhattan. On 9/11 it was protected from falling debris by an uprooted sycamore tree and it housed volunteers for eight months after the attacks. Today the chapel has an exhibit of artifacts, such as photos, cards and banners from the relief effort. Its churchyard contains a bronze Bell of Hope, presented by the mayor of London, cast at the same foundry as the Liberty Bell and London’s Big Ben. The bell symbolizes the empathy and solidarity of the people of London with the people of New York. On 11 September, 2011, the bell will be rung at 8:46 am, the time of the North Tower attack, and again at 7:14 pm.
Tweet
Pope Shenouda Article