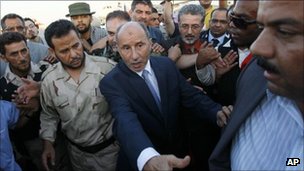 The head of Libya's interim government, Mustafa Abdul Jalil, has flown to Tripoli for the first time since anti-Gaddafi forces captured the capital.

Mr Abdul Jalil was greeted by hundreds of cheering, flag-waving supporters.
Until now he had remained in the eastern city of Benghazi. His presence in the capital is aimed at sending a message about his authority.
To the south, Nato aircraft bombed Bani Walid, one of the last pro-Gaddafi strongholds, following fighting there.
Separately, the IMF has recognised Mr Abdul Jalil's National Transitional Council (NTC) as the new government of Libya.
'Coming together'
Anti-Gaddafi forces entered Tripoli on 21 August.
Since then Mr Abdul Jalil has been running the interim administration from Benghazi, prompting questions about the transitional council's ability to impose its authority elsewhere in the country.
Officials close to Mr Abdul Jalil have cited security concerns as one reason why he has stayed away until now.
There were were chaotic scenes as he emerged from the aircraft that had brought him from Benghazi. Crowds of people surged forward trying to get close to him as soldiers struggled to maintain order.
At a news conference at the airport, he urged unity and order.
"This is not the time for retribution or to take matters into your own hands. Many rights were lost and there are many tragedies that we could dwell on but this is not the time. This is the time to come together."
NTC spokesman Jalal al-Gallal described Mr Abdul Jalil's arrival in the capital as "historic", and said he would meet the full council "to start the next stage of building a new Libya".
BBC correspondents say he now faces big challenges as he tries to stabilise the country and form an effective national administration.
Anti-Gaddafi forces now control most of the country - the colonel's whereabouts are unknown.
But his fighters have been putting up fierce resistance in Bani Walid, one of four towns they still control.
The BBC's Andrew Harding, near the town, says the situation there is chaotic.
The attackers say they are facing heavy artillery and rockets from Gaddafi loyalists inside the town.
But they insist they are making progress and their military spokesman Abdulrahman Busin says the town will fall imminently.
"They've taken the gate of the city, the entrance of it, and they've taken a large section of a residential area near it as well," he told the BBC.
On Saturday, the attackers pulled back from the town while Nato aircraft conducted bombing raids to aid the anti-Gaddafi advance.
However, our correspondent says the battle for Bani Walid and the end game for Col Gaddafi are not likely to be quick or clean.
The four loyalist-held towns of Bani Walid, Jufra, Sabha and Sirte had been given until Saturday to surrender to the interim government.
NTC troops pulled back from Gaddafi's home town, Sirte, on Friday after heavy casualties, the Associated Press news agency reports.
Niger arrivals
Several convoys of former loyalists are said to have streamed over Libya's southern border with Niger over the past few weeks.
Late on Friday the Niger government said four more senior Libyan officers had entered the country.
Niger has not said clearly what its position would be if Col Muammar Gaddafi himself sought asylum in the country.
On Saturday, Guinea-Bissau's prime minister said the colonel would be "welcomed with open arms" if he chose to travel to the West African country.
Tweet
Pope Shenouda Article