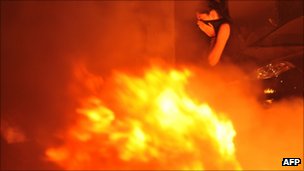 The Greek prime minister has vowed to press ahead with deep spending cuts, in his annual speech on the country's debt-ridden economy.

"We will push through all the major changes our country has needed for years," George Papandreou said in Greece's second city, Thessaloniki.
Public anger over cuts boiled over into clashes between police and protesters and more than 100 people were detained.
At least 20,000 people joined the protests in Thessaloniki.
Trade unionists, students, anarchists, taxi drivers and football fans were among those holding protests outside a trade fair in the city.
Greece is struggling to meet the terms of an international loan package.
In July, eurozone leaders announced a bailout worth 109bn euros ($155bn, £96.3bn), on top of a 110bn euro lifeline granted last year.
The government has sharply criticised other eurozone states for delaying ratification of the second bailout but it is struggling to meet conditions attached to the first.
Mr Papandreou's speech was designed to reassure EU and IMF lenders increasingly frustrated with delays in reforms and missed fiscal targets that Greece would press ahead with unpopular policies, correspondents say.
'Existential struggle'
"We decided to fight the battle to avoid a disaster for the country and its people and to stay in the euro," he told the trade fair.
"Any delay and wavering is dangerous for the country."
"We don't have the right to abandon this effort halfway through because if it remains half-done, [our] sacrifices will have been in vain," he added.
On Friday, Finance Minister Evangelos Venizelos was forced to deny rumours of impending bankruptcy, saying that the next two months would be "crucial for the very existence" of the country.
As Mr Papandreou was preparing to deliver his speech on Saturday, police were firing tear gas to drive back protesters, some of whom threw stones and set fires.
At one stage, protesters toppled metal crowd control barriers near the trade fair area.
Reuters news agency noted taxi drivers were among the most vocal protesters, with the government planning to open up their trade to competition.
A huge banner displayed by marchers in Thessaloniki read: "We owe nothing, we pay nothing, we sell nothing, we fear nothing."
Some clashes were also reported at a protest rally opposite the Greek parliament in the capital, Athens.
Tweet
Pope Shenouda Article