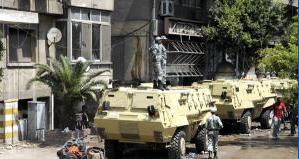 CAIRO (Updated) - Egypt said Saturday it would send those who incited or took part in the violence targeting the Israeli Embassy in Cairo to an emergency state security court, pledging to protect all embassies in Egypt, after three people were killed in the overnight clashes outside the Israeli embassy.

Information Minister Osama Hassan Heikal stressed that Egypt had passed a 'crucial' day on Friday that made "Egyptians feel worried over some behaviours, which jeaopardise the Egyptian revolution and tarnishes the state's image inside and outside".

"Legal measures will be taken to transfer those in custody and those who are found to be involved in inciting or participatig in the events to the emergency state security court," Minister Heikal said after a crisis meeting between a mini-Cabinet and the Supreme Council of the Armed Forces.
Heikal added that those involved in storming the Israeli Embassy in Giza could not be described as 'honourable'. "The incident affected the prestige of the State inside and outside," said Heikal.
He affirmed Egypt's "total commitment" to protecting all embassies in Egypt.
"Egypt affirms its total commitment to respecting international conventions, including the protection of all (diplomatic) missions," Heikal said.
He also said that authorities would apply "all articles of the emergency law to ensure safety" following the embassy attack. However, he did not elaborate what such articles are. According to the emergency law, assemblies of more than five are prohibited as violators are referred to state security courts.
The official stressed that tolerance and the exercise of high self-restraint by security personnel led some rioters to go ahead with challenging and attacking them.
"The police as of now will use all possible means to confront thuggery and insecurity and take all necessary measures to guarantee the security of vital buildings and to defend themselves," said Heikal.
The Interior Ministry was on a state of alert yesterday after the protesters stormed the Israeli embassy, prompting the ambassador to flee, in the first attack of its kind since the two nations made peace 32 years ago.
Israeli Prime Minister Benjamin Netanyahu called the mob attack a "serious incident" and an unnamed official warned it was a "painful blow to peace" between Egypt and the Jewish state.
The Israeli official said Ambassador Yitzhak Levanon, other staff and dependants had all left Egypt but that a senior diplomat remained behind. "We left the deputy ambassador to keep up contact with the Egyptian government," the official told AFP in Jerusalem.
He said six embassy staff were plucked to safety by Egyptian commandos. "It was a painful blow to the peace between us and a grave violation of diplomatic norms," the official said.
State television said the military council rejected an offer by Prime Minister Essam Sharaf offer to resign, according to a report by State TV.
Israel and Egypt are working to preserve the landmark peace accord they signed in 1979, Prime Minister Benjamin Netanyahu's spokesman said, as Netanyahu was due to give a speech on the issue late at night.
"There is a new Egyptian administration with which are fully and painstakingly coordinating. And it is the intent of this Egyptian administration, as it is that of the government of Israel, to preserve the peace that has been preserved for more than 30 years," spokesman Roni Sofer told Israel's Army Radio
The embassy attack was the worst since Israel established its mission in Egypt after becoming the first Arab country to sign a peace treaty with the Jewish state in 1979.
The violence is also the worst episode in tense relations since the killing of five Egyptian policemen last month on the border as Israel hunted militants after a deadly attack.
Three people were killed in the overnight clashes between police and protesters, hospital sources said, and the health ministry said one person died of a heart attack.
More than 1,000 people, including some 300 policemen, were also injured in the clashes that continued overnight, medical and security sources said.
Police, meanwhile, arrested 19 people and referred them to the military prosecution which immediately began interrogating them, a security official said.
The Muslim Brotherhood, Egypt's most organised political group, condemned the incident, stressing the need to transfer the power to a civil government soon.
"The SCAF should take immediate steps to transfer power to a civil government and confront the powers trying to fail the revolution," the group said in a statement.
Most political groups condemned the storming of the Israeli embassy.
Tweet
Pope Shenouda Article