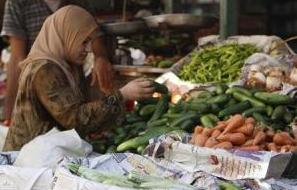 CAIRO - Egypt's inflation rate declined in August as food prices, one of the causes of the unrest that toppled President Hosni Mubarak, rose at a slower pace.

The annual inflation rate in urban parts of Egypt, the gauge that the central bank monitors, fell to 8.5 per cent from 10.4 per cent in July, according to data posted on the website of the Central Agency for Public Mobilisation and Statistics.
Food and beverage costs, the biggest component in the consumer price index, increased an annual 12.2 per cent, from 16.7 per cent a month earlier. In the month, consumer prices rose 1.1 per cent.
"Food prices are continuing to decelerate because we don't have the same problems with poultry and meat that we had last year," Mohammad Abu Basha, an economist at Cairo-based investment bank EFG-Hermes Holding SAE, said.
"The central bank is likely to maintain the interest rates because the economy is still weak."
Tweet
Pope Shenouda Article