What if it was the Egyptian flag? 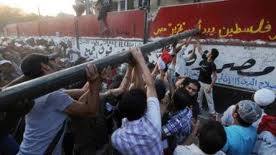 The wrath which raged, and is still raging, against Israel in the Egyptian street is both legitimate and justified. It is a show of public fury at the killing of five Egyptian security personnel last month during an Israeli operation against cross-border terrorist raiders who had assassinated eight Israelis and injured 30 before escaping inside Egyptian territory near Eilat. Angry demonstrations and sit-ins were held in front of the Israeli Embassy in Cairo, protesting Israeli transgression against Egyptian sovereignty.

The public hostility and anti-Israeli sentiments express bitterness which has been for decades building up against Israeli aggression, and is fully understandable. The burning of the Israeli flag was a condemnation of Israeli practices and came as an expression of protest used worldwide.
When one demonstrator, however, mounted the high rise building which houses the Israeli Embassy on its top floor and pulled down the Israeli flag, the move carried the entire matter into uncharted territory. What followed the impulsive, emotional, irrational act made the hitherto justified anger impossible to justify or condone. And I do not mean the public boil-over of emotions which wildly applauded the act and made of its perpetrator an instant hero; this too is understandable. But for the Egyptian media to hail the pulling down of the Israeli flag as a heroic victory, and for Egyptian officials to shower the ‘courageous hero’ who pulled down the flag with awards and prizes, is at best immature behaviour totally lacking in reason, soundness and foresight.
If we can excuse the angry crowd its impulsive, spontaneous behaviour, how can we excuse the media? Relinquishing its major role of properly informing the public and making it aware of the facts without delusions, the media went on a cheering spree, hailing the ‘hero’ and describing his irresponsible action as a daring, triumphant feat. And how can we exonerate officials who happily went with the flow, and honoured the media ‘hero’ for his ‘outstanding’ achievement; to the point where other individuals, eyeing with envy the overwhelming revelry, claimed they—not the acknowledged hero—had accomplished the ‘valiant feat’?
I contemplated the scene, looking hard for a voice of reason to counter the emotional sensationalism. All I found were some very few writers who cautiously braved the waters and quickly retreated, apparently in favour of avoiding provoking populist hostility. But I still believe it our duty to analyse the incident and place it in its true perspective. Attacking a foreign embassy inside our land and pulling down its country’s flag infringes upon the rules of International Law and diplomatic conventions, which all stipulate that embassies and premises of diplomatic missions are sovereign territory of the their respective countries. This means that an assault on a country’s embassy is a transgression against that country and an act of hostility that makes its perpetrator liable under International Law.
Egypt’s officials and media ought to realise this fact when dealing with the ‘flag’ incident; they should avoid embarrassing Egypt by successive infringements. To the enraged public, whether those who acted spontaneously and impulsively or those whose anger was exploited by political streams with specific agendas that do not accommodate Egyptian national interest, I say: can you conceive swapping roles? How would the public, as well as the Egyptian media and officials feel and react if the Egyptian Embassy in Tel Aviv is attacked and the Egyptian flag pulled down? I imagine fits of anger and protest on all levels to denounce such a move, lament the loss of Egyptian sovereignty and the desecration of Egyptian soil, and condemn the bigotry that would have led to the pulling down of the Egyptian flag. We would be fully justified in our rejection and denouncement of the incident, locally and internationally.
Our media must thus, candidly and transparently, adhere to its role of enlightening the public; and our officials must think rationally before blundering into erroneous behaviour. Finally, my message to all Egyptians is not to get carried away by acts of false heroism, because Egypt is still awaiting heroes who can pull down flags of retardation and corruption.
Tweet
Author