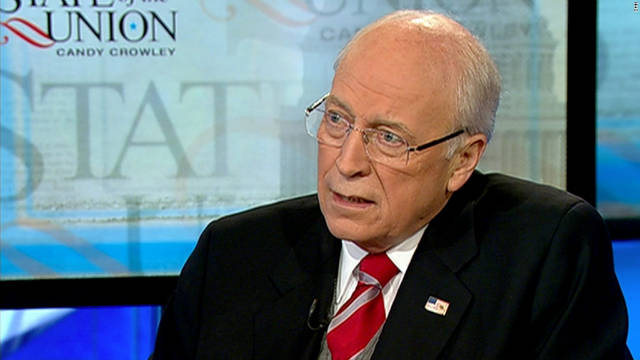 Al-Awlaki -- an American whose fluency in English and technology made him one of the top terrorist recruiters in the world -- was killed Friday in Yemen, according to U.S. and Yemeni government officials.
The strike also killed Samir Khan, an American of Pakistani origin, and two others who were in the same vehicle as al-Awlaki, said the U.S. official, who was briefed by the CIA. Khan specialized in computer programming for al Qaeda and authored the terror network's online magazine, Inspire.
"I think it was a very good strike. I think it was justified," Cheney told CNN's Candy Crowley on "State of the Union." But "I'm waiting for the administration to go back and correct something they said two years ago when they criticized us for 'overreacting' to the events of 9/11."
Obama "in effect said that we had walked away from (America's) ideals," Cheney argued. "I think he did tremendous damage. I think he slandered the nation and I think he owes an apology to the American people."
The Obama administration has "clearly ... moved in the direction of taking robust action when they feel it is justified," Cheney said.
Republican critics of the administration claim it is hypocritical for Obama to approve the killing of Americans without due process while criticizing Bush officials for signing off on the use of so-called "enhanced interrogation techniques" such waterboarding.
The use of such techniques has been banned by Obama.
Former Rep. Jane Harman, D-California, told CNN that she believes many of Obama's critiques of the Bush White House -- most notably its secrecy -- are valid.
"I don't think the Obama administration should be repeating" those mistakes, Harman said. "I think the debate about the legal grounds (for counterterrorism strategy) should be more in the open," she said. In particular, "we should have a legal framework around our interrogation and detention policies far more than we do now."
Harman, a former top member of the House Intelligence and Homeland Security committees, also cautioned about the need for strict guidelines in the use of drone strikes, which have increased under Obama's watch. Critics of drone strikes argue that they undermine the U.S. cause by killing innocent civilians, infringing on the sovereignty of other nations, and generating sympathy for al Qaeda and other extremist organizations.
"We could abuse this program," Harman said. "We've got to have a counter-narrative (to dissuade potential terrorists). We've got to live our values."
Retired Gen. Michael Hayden, a former CIA director under George W. Bush, largely dismissed Harman's warning, telling CNN that critics of drone strikes "greatly exaggerate" their collateral damage.
The strikes are arguably the most critical weapon in the U.S. arsenal against al Qaeda, Hayden said.
Tweet
Pope Shenouda Article