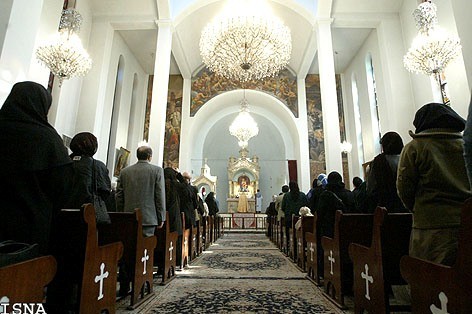 International pressure is growing on Iran to overturn a death sentence imposed on a Christian pastor for apostasy.

Pastor Youcef Nadarkhani, a member of a Protestant evangelical church in the Islamic republic, faces death by hanging for refusing to abandon his Christian faith.
The 34-year-old pastor of the Church of Iran was born a Muslim but became a Christian after his 19th birthday.
Under Iran's version of sharia law that makes him an apostate - Muslims cannot renounce the faith into which they were born.
According to an unofficial translation, the court's judgment said, "He has frequently denied the prophethood of the great prophet of Islam and the rule of the sacred religion of Islam. And he has proven his apostasy by organizing evangelistic meetings and inviting others to Christianity, establishing a house church, baptizing people, expressing his faith to others and denying Islamic values."
The New Statesman website said the judgment concluded Mr. Nadarkhani "will be executed by being hung until somehow his soul is taken from him."
At a hearing in his hometown of Rasht, a city on the shores of the Caspian Sea in northwestern Iran, on Sunday, Mr. Nadarkhani said he had no intention of returning to Islam, the Daily Mail reported.
"Repent means to return. What should I return to?" he asked. "To the blasphemy that I had before my faith in Christ?"
However, the court said because the man has Islamic ancestry, he therefore must "recant his faith in Jesus Christ."
When the court ordered him to "return to the religion of your ancestors - Islam," Mr. Nadarkhani replied, "I cannot."
On Thursday, William Hague, the British Foreign Secretary said, "I deplore reports that Pastor Youcef Nadarkhani, an Iranian church leader, could be executed imminently after refusing an order by the Supreme Court of Iran to recant his faith.
"This demonstrates the Iranian regime's continued unwillingness to abide by its constitutional and international obligations to respect religious freedom."
In Washington, the Obama administration also condemned the action and called for Mr. Nadarkhani's release.
"The United States condemns the conviction of Pastor Youcef Nadarkhani. A decision to impose the death penalty would further demonstrate the Iranian authorities' utter disregard for religious freedom," White House spokesman Jay Carney said. "Pastor Nadarkhani has done nothing more than maintain his devout faith, which is a universal right for all people."
EU foreign policy chief Catherine Ashton said, "I call for Mr. Nadarkhani's immediate and unconditional release." Meanwhile, Poland summoned Iran's ambassador to demand a stay of execution.
Mr. Nadarkhani's lawyer, Mohammad Ali Dadkhah, said he was "optimistic" the pastor would be freed soon, despite admitting, "Mr. Nadarkhani did not repent and the last court verdict said he would face a death sentence if he did not."
He insisted, "However, we offered our explanations and I think the court was convinced. I am optimistic there is a 95% chance he will be released in the final ruling, which I expect by the end of next week."
Iranian authorities are concerned about the spread of other faiths in the country in which the vast majority of people are Shiites. There are thought to be about 100,000 Christians and 350,000 Baha'i out of a population of about 78 million.
Mr. Nadarkhani, a married father of two, was arrested in 2009 when he tried to register his church. Supporters say he did not want his son to be educated Islamically, which is mandatory in Iran.
He was initially charged with protesting, but the charges were later upped to apostasy and evangelizing Muslims, both of which carry the death penalty.
The pastor was spared by a supreme court appeal ruling in July, his lawyer said, but was again condemned to death after the case was reheard. The pastor's wife, who was initially sentenced to life imprisonment, was released on appeal.
There are reports Iran has detained other Christian leaders - Behnam Irani, who was convicted of leading church services in Christian homes; Matthias Haghnejad, who was arrested last month, but the charges against him are not known; and Behrouz Sadegh-Khandjani, pastor of a church in Tehran.
Tweet
Pope Shenouda Article