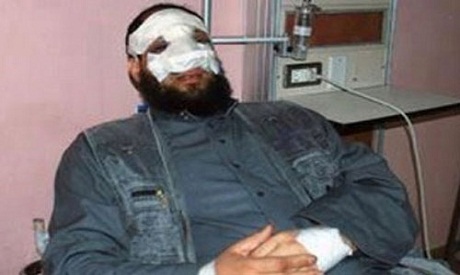 SalafistNour Party MP Anwar El-Balkimy was allegedly attacked few days ago in the latest reported armed assault on a prominent Egyptian politician. Allegations, however, have subsequently emerged that the MPs facial injuries – which he says he sustained in the attack – were actually the result of a plastic surgery.

Sunday the Islamist Nour Party surprised everyone after initially standing by their member by announcing that the party decided to sack Anwar El-Balkimy in a development that indicates the near end of the MP's nascent political career.

El-Balkimy told reporters from his hospital bed that he had been attacked by a group of masked gunmen while on the Cairo-Alexandria desert highway on 29 February 2012. With his face wrapped in bandages, El-Balkimy recounted how the assailants had beaten him – leaving him unconscious in the road – before stealing some LE100,000.

The Salafist MP was later transferred to the Sheikh Zayed Hospital in Cairo’s 6 October district in critical condition. He reportedly underwent a serious operation on his face, which, according to initial reports, had been badly injured.

Judging from his injuries, however, the attack on El-Balkimy – if that’s what it was – was considerably more violent than the two earlier attacks on political figures.

Nour Party MPs requested that the interior minister be subject to questioning over the attack on their colleague. The interior ministry, for its part, expressed its sorrow for the incident in a letter to parliament’s national security committee.

However, last week employees of a plastic-surgery clinic in Giza’s Agouza district alleged that the MP had undergone a plastic surgery on his nose on the same day of the alleged attack. The bandages on El-Balkimy’s face, they claimed, did not cover injuries sustained in an attack, but rather masked the effects of a plastic surgery.

The clinic manager went on to assert that El-Balkimy had a plastic-surgery procedure performed on his nose on 28 February. The MP, the manager alleged, had insisted on leaving the clinic immediately after the surgery, despite doctors’ recommendations that he remain in hospital for a couple of days.

The manager went on to claim in statements to the media that the MP had urged him not to tell anyone that he had undergone plastic surgery. The claims of the manager of the clinic were supported by seven other eyewitnesses at the clinic, including four doctors and two nurses.

Plastic surgeries are considered haram (religiously forbidden) for ultra-conservative Salafists, who adhere to a strict interpretation of Islamic edicts.

Doctors at Sheikh Zayed Hospital, however, insist that El-Balkimy’s injuries on his face and body were the result of assault – not plastic surgery. Hospital officials have promised to send x-rays of the MP’s injuries to relevant judicial authorities.

El-Balkimy, for his part, has threatened to bring libel charges against the clinic and its manager.

The interior ministry and state prosecutors, meanwhile, are currently investigating the incident. Egypt’s public prosecutor has reportedly sent an official request to parliament for permission to question the MP.

It seemed that the Nour Party was standing by the its member - even threatening to sue the clinic for libel. However, the Nour Party found Anwar El-Bakimy to be a "liar," after official investigations, says the official spokesperson, Nadr Bakkar, and the party sacked Anwar El-Balkimy.

It is unclear even to this moment what repercussions this will have on the member of parliament in the People's Assembly (lower house), but without a doubt, his nose has ended his political career.