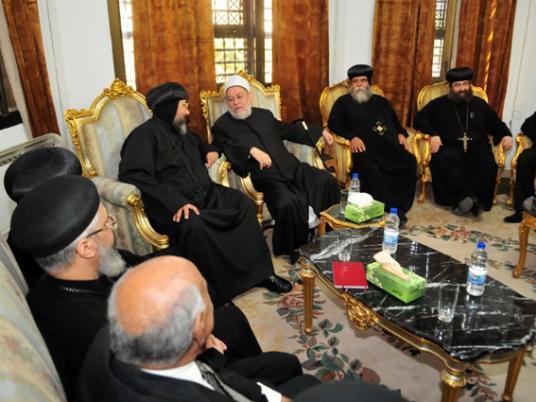 The 20-member Holy Synod made a unanimous decision to withdraw the two church officials elected to the committee.
The church “considers it inappropriate to continue to be represented given the reservations of various political forces on how the constitutional commission was composed,” MENA said.
The commission comprises 100 members selected by Parliament, but it is mainly made up of Muslim Brotherhood members and Salafi fundamentalists, who also are the majority among lawmakers.
Several parties and secular figures in recent days have withdrawn from the panel this week, saying their presence was used as collateral for Islamists to draft a constitution that reflects their political and religious ideologies.
Al-Azhar, the key reference institution in Sunni Islam, also announced its withdrawal, distancing its ideology of moderate Islam from that of the Muslim Brotherhood and Salafi fundamentalists.
Coptic Christians constitute 6 to 10 percent of the country’s population of about 82 million.
Coptic Pope Shenouda III, an ardent defender of his community, died 17 March at age 88 and has not yet been replaced.
The church’s decision to boycott the panel comes after the Brotherhood on Saturday announced it would nominate a candidate for the presidential election slated for 23 May, breaking the group’s previous promise that it would not field a candidate.
The decision to nominate the group’s deputy leader, Khairat al-Shater — a business tycoon and the group’s main financier — has sent shock waves through political circles.
Tweet
Pope Shenouda Article