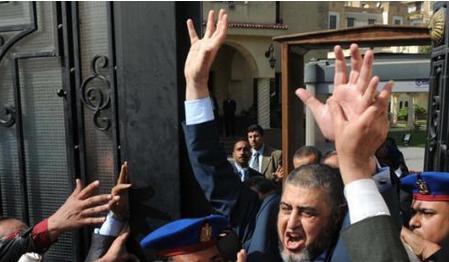 A bid for power by Hosni Mubarak's former intelligence chief is an insult to Egypt's revolution that, if successful, would trigger a second nationwide revolt, the Muslim Brotherhood's candidate for Egypt's presidency said.

In his first public comments since being nominated by the Brotherhood on 31 March, Khairat al-Shater played down fears of a clash between the powerful Islamist movement and the army generals who have ruled Egypt since Mubarak was ousted last year.
But he warned the Brotherhood would not back a US$3.2 billion emergency IMF loan requested by the army-backed government unless the terms are changed or the government steps down and lets a new administration oversee how the funds are spent.
In an interview with Reuters on Sunday, the 61-year-old millionaire businessman denounced former intelligence chief Omar Suleiman's eleventh-hour decision to seek his former boss's job. Mubarak made Suleiman vice president just before losing power.
"I consider his entry an insult to the revolution and the Egyptian people," Shater said. "Omar Suleiman has made a big mistake. He will only win through forgery and, if this happens, the revolution will kick off again."
The military council, which took over from Mubarak in February last year, has said it will hand power to civilians after a presidential election due to be held in May and June. More than 20 candidates completed the formalities to run for head of state and the top contenders are all Islamists or Mubarak-era politicians.
Support from the Brotherhood's formidable campaign machine makes Shater an immediate front-runner in the vote. Suleiman is a dark horse who proved he still wields political clout by quickly collecting the 30,000 signatures of eligible voters that he needed to run.
Violent protests and sectarian clashes have prolonged an economic crisis since Mubarak's overthrow but the streets have returned to relative calm after a parliamentary election as the country's political forces maneuver for influence and the army prepares to step aside.
The Brotherhood, which built support for its project of an Islamic state through decades of preaching and charity work, was suppressed by Mubarak but shifted to the center-stage of politics after the January 2011 popular uprising begun by liberal and left-wing revolutionaries.
It promised not to monopolize power in the style of Mubarak and his associates but its Freedom and Justice Party (FJP) now has almost half the seats in parliament and dominates an assembly tasked with drawing up a new constitution. Now it has reversed a pledge not to field a candidate for the presidency.
Avoid clash
Shater, who stepped down as Brotherhood deputy leader to run for the presidency, said the decision was motivated by fear that the army-backed government was failing to cooperate with the Brotherhood-dominated parliament and the movement needed an executive post in case the assembly lacked teeth.
But he said a clash with the military – the backbone of national security – must be avoided.
"Even if there are issues with the military council's handling of the transitional period, such issues must be resolved in a way that does not lead to a real clash with the armed forces," he said. "We must, in fact, work to strengthen and develop the army."
The government began negotiating the loan with the International Monetary Fund in January to help it avert a balance of payments crisis.
The IMF has said broad political support in Egypt is a prerequisite for the loan deal and the Brotherhood has yet to provide its backing. The government now says the talks might not conclude before June.
"We told them (the government), you have two choices. Either postpone this issue of borrowing and come up with any other way of dealing with it without our approval, or speed up the formation of a government," Shater said.
The Brotherhood could also accept a loan if the size of the initial disbursement is reduced so that most of the funds are paid out after a new government takes power following the completion of a presidential vote in June, he added.
Tweet
Pope Shenouda Article