Central Committee for national awareness warn of rumors about Copts 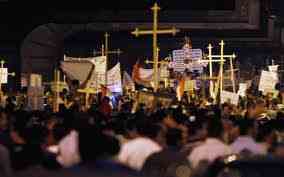 Central Committee of national awareness in Alexandria, which includes a number of secular members of the Church, has issued a statement saying that a number of mass media was noticed trying to spread rumors about the Copts to draw attention away from other group that have many problems concerning politics and credibility.

The statement mentioned the talk about Copts traveling to Jerusalem in the Easter which makes media accuse Copts of normalization of relations with Israel after the departure of His Holiness Pope Shenouda III. This is completely untrue as the number of flights this year is less than the past years, and those numbers are valid upon request.
The statement which was entitled “for the sake of Egypt” said: We should be fully aware of such scheme, and avoid being made a scapegoat for the cascading failures and mistakes of other groups.
The statement also pointed out to the attempts to accuse the Copts of supporting only one presidential candidate. It said that Copts will elect the candidate who calls for a civil state not opposing the values of citizenship or supports discrimination between citizens based on a sectarian classification.
Tweet
Author