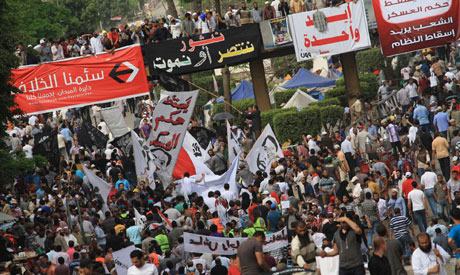 At least two, a civilian and a military soldier, were shot dead by unkown perpetrators and 373 injured in the melee that erupted in front of the Ministry of Defence headquarters, located in Cairo's Abbasiya district, after flocks of demonstrators protesting against military rule locked horns with army forces.
While it remains unclear who initiated the violence in which protesters stoned military forces and the latter used teargas and water cannon to disperse the crowd, several political groups put the turmoil down to overly zealous revolutionary protesters, others blamed the ruling Supreme Council of the Armed Forces (SCAF).
Keeping the peace
Emad El-Din Abdel Ghafour, president of the Salafist Nour Party, told Ahram Online, "The revolution has always been peaceful; violence is completely unacceptable. Egyptians have clinched many of their rights [since the 2011 uprising] and we are on the verge of the first clean presidential elections to complete the transitional period.
"Everyone must maintain the peaceful nature of the revolution. What happened was a shock to many Egyptians and fellow Arab citizens in other countries. Fear over the future of the country grows amid such turmoil, so we need to cool down the tensions.
"I went to Abbasiya last Tuesday (one day before 11 civilians were killed at the hands of unknown plainclothed assailants who attacked an anti-SCAF sit-in outside the defence ministry) and met some 20-25 of the protesters. We talked for a while and they seemed to be responding to reasoning. I asked them to think about the future and not to be impulsive."
Islamist presidential hopeful Mohamed Selim El-Awa branded the Abbasiya protesters as "conspirators" acting upon orders from toppled president Hosni Mubarak. He believes that protecting peaceful protesters is the duty of the authorities, but said that attempts to break into the Ministry of Defence or any other state facilities cannot be tolerated.
"This was an attempt to prove that mayhem rules … I also refuse insults against the Egyptian army," he told Dream TV late on Friday after the clashes. "Everyone must now focus on the transition of power from the Supreme Council to an elected president.
"I think what happened in Abbasiya [was instigated] by the remnants of conspirators following Hosni Mubarak's orders," El-Awa opined.
The liberal Free Egyptians Party echoed similar sentiments, yet less pointed towards protesters, in a Saturday statement, condemning "attempts to push the country towards bloody confrontations."
The party, which was founded by business tycoon Naguib Sawiris shortly after last year's uprising, also warns of "political selfishness that might lead to chaos, which could squander all previous efforts to pave the way for a democratic state."
Supporters of disqualified presidential hopeful Hazem Salah Abu-Ismail were the most notable among the activists who embarked on the Abbasiya sit-in. They were protesting the performance of the Supreme Presidential Electoral Commission (SPEC), especially its decision to eliminate Salafist poster-child Abu-Ismail because official documents from US authorities pointed out that his late mother held US citizenship.
SCAF criticism from Brotherhood, revolutionary presidential candidate
The Muslim Brotherhood's political wing, the Freedom and Justice Party (FJP), who on Friday organised a mass protest in Tahrir Square to denounce Wednesday's deaths in Abbasiya and sound disgruntlement with the recent practices by the ruling military council, blamed military personnel for the use of force.
"The Freedom and Justice Party (FJP) denounces the use of force in dispersing peaceful protesters in the vicinity of the Ministry of Defense and Abbasiya Square," read a statement posted on the Brotherhood's English-language website, ikhwanweb.
Although it voiced support for the Abbasiya demonstrators, the FJP assured that they refuse "any clashes with members of the armed forces whose job it is to secure the Ministry of Defence building."
The statement continued: "The FJP affirms that the demands brought by the demonstrators in front of the Ministry of Defence agree with the demands of the million man march held in Tahrir Square at the invitation of a number of political parties and movements, including the FJP and the Muslim Brotherhood.
"The party emphasises that the real guarantee for the transfer of power on schedule is for the people to safeguard the forthcoming presidential elections, turn out positively to the ballot boxes and to respect the outcome of the elections."
For his part, rights activist and presidential contender Khaled Ali is convinced the Abbasiya turmoil represents a "new episode in a scenario that will see the revolution aborted." "The military council has been protecting the counter-revolution, which it also planned, since 9 March 2011," he charged.
Counter-revolution is a term used by those who believe that remnants of the former regime are systematically seeking to defame the uprising, mainly by applying underhand tactics to increase violence and tensions in the domestic political scene.
The 9 March 2011 saw the first confrontations between the armed forces and revolutionaries in Tahrir Square. Many protesters claim to have been brutalised and tortured at the hands of military personnel on that day.
Mohamed El-Beltagi, secretary general of the FJP, said in a statement on behalf of the Democratic Alliance for Egypt Coalition during a meeting held by the coalition's parties that "accusing protesters of treason is not acceptable, especially by the military rulers." "Questioning the loyalty of authorities is not acceptable either."
SCAF Major General Mukhtar El-Mulla said in a televised statement that "irresponsible elements tried on Friday afternoon to bypass the security barricades around Ministry of Defence" and proceeded to "attack army personnel guarding the ministry with rocks and molotov cocktails."
The FJP and SCAF have been at odds as Brotherhood MPs have been seeking to dissolve the incumbent interim cabinet, which SCAF wants to keep in place until a new president assumes power.
Tweet
Pope Shenouda Article