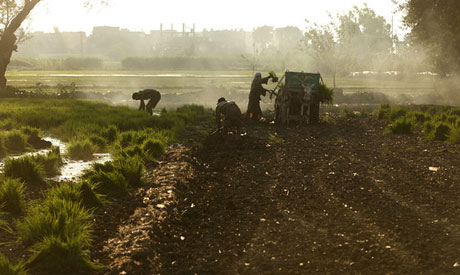 Saleh said that Egypt's total rice production stood at 4.6 million tonnes in 2011/12, up 7 per cent from the previous year.  Annual rice consumption, the minster added, currently stands at 3.5 million tonnes, leaving a surplus of roughly one million tonnes for export.
Each exporter, meanwhile, will have to pay LE1000 (roughly $164) per tonne in export fees.
Mahmoud Eissa, former Egyptian foreign trade minister, told Ahram Online that areas allocated to rice cultivation in Egypt currently ranged between 1.6 and 1.7 million feddans (1 feddan equals roughly 1 acre), which, he said, was enough to cover both domestic consumption and exports.
In March 2008, then-trade minister Rachid Mohamed Rachid imposed a blanket ban on Egyptian rice exports in hopes of shoring up waning rice supplies in the domestic market.
In June of last year, Rachid – currently believed to be in the UAE – was sentenced in absentia to ‎five years in jail after being convicted of embezzling public funds. ‎ He was also ordered to return some LE9.3 million that he was found guilty of ‎accruing illegally during his tenure as trade minister.‎
In September of last year, Eissa extended the rice-export ban by an additional year to pre-empt domestic supply shortages.
Ahmed El-Wakil, a prominent Egyptian rice exporter, criticised the timing of the new trade minister's decision to resume rice exports, noting that the peak months for rice export were August, September and October.
"We have no time to prepare our shipments since we haven't received orders from importers," said El-Wakil. He noted that Libya, Turkey, Sudan, Syria and Jordan – along with several Eastern European countries – represented the primary importers of Egyptian rice.
According to Egypt's General Organisation for Export & Import Control, Egyptian rice exports generated a total of $194 million in 2008 .
Despite the export ban, this figure rose in 2009 and 2010 to $409 million and $334 million respectively.
"Despite the ban, the government allowed exceptional exports to specific countries in particular need of rice, such as the Gaza Strip in Palestine, Sudan and Libya," explained Sherif El-Beltagi, head of Egypt's Agricultural Export Council.
In September, Egyptian President Mohamed Morsi pledged to raise the price paid by the government to rice farmers from LE1500 per ton to LE2000.
Tweet
Pope Shenouda Article