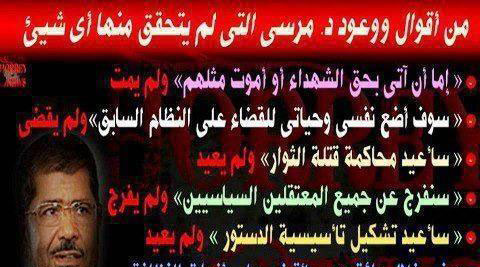 Writer Fatima Naaot has written a statement on her Twitter account, in which she mentioned a number of promises that were made by president Mohammed Morsy during his electoral campaign, but were never fulfilled.

Naaot explained saying that Dr. Morsy had promised to solve many problems of Egypt during his first 100 days of presidency such as: taking revenge for the martyrs of the revolution, releasing all political detainees, re-forming constituent committee, and eliminating problems of cleaning, security, traffic, fuel, and subsidized bread, but he didn't!
Tweet
Pope Shenouda Article