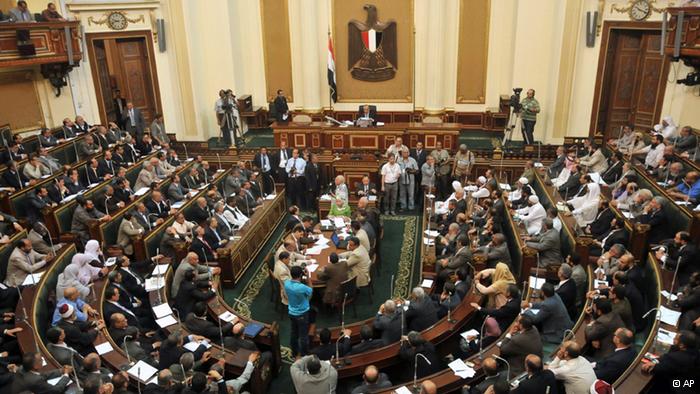 The draft constitution currently under discussion in Egypt is enraging liberals. They accuse the Muslim Brotherhood and the Salafists of curtailing civil rights and trying to turn Egypt into an Islamic state.

The first Egyptian constitutional convention was dissolved by the High Administrative Court, which is now threatening to dissolve the second as well. So many lawsuits have been filed against the convention that it's hard to maintain an overview. The current, second convention is dominated by Islamists; the draft constitution it's debating is already at an advanced stage, and is highly controversial. The High Administrative Court was expected to decide on Tuesday (2 October) whether or not the convention should be dissolved, but it postponed the hearing. A decision is now expected sometime in the coming weeks.
Meanwhile, attacks on the convention continue. Ragab Saad Taha, a scholar at the Cairo Center for Human Rights Studies, shares the skepticism many experts have been expressing. His criticism starts by focusing on the members' qualifications for selection. "The constitutional convention is in serious crisis - partly because it's dominated by the Islamists, but partly because it lacks qualified members. Hardly any of them is an expert in constitutional law," says Taha.
Civil rights curtailed
Eventually the people will have to decide on the constitution
Most of the criticism, though, is directed at the content of the draft. Liberals in particular are accusing the convention, which is dominated by Salafists and the Muslim Brotherhood, of trying to curtail civil rights. Ragab Saad Taha is particularly critical of proposals to restrict freedom of information. "There's an article that permits the authorities to ban the spreading of information if it affects national security. For example, the government banned the American University in Cairo from using a particular history book, in the name of national security."
The book deals with - among other things - the Egyptian military, which after decades of propaganda enjoys heroic status among the people. Any book that is too critical of the army is thus deemed undesirable. The ban Taha refers to was made not under the new proposals but under the current constitution. The principle, however, is the same. As there is no clear definition of what constitutes "national security," a paragraph like this is open to governmental abuse.
And the fears do not end here. Many of the convention's critics believe that the Muslim Brotherhood and the Salafists want to establish an Islamic state in Egypt. The Salafists have demanded that in future Islamic scholars at Cairo's Al-Azhar University, which is one of the world's most important centers for the interpretation of Sunni Islamic law, should decide whether Egyptian laws are compatible with the principles of Islamic law. For Ragab Saad Taha, this would mean the creation of a religious institution with authority over the elected parliament.
Religious freedom under threat
The Muslim Brothers want the state to be run on Muslim lines
Mahmoud Mostafa Saad, Director of the Media Center of the Muslim Brotherhood's Freedom and Justice Party, plays down the problem. "The Al-Azhar University will have a consultative role, but the final decision will come from the parliament. The majority of members in the convention agree that this institution will just be an advisory body."
Religious freedom is also likely to be curtailed. The Salafists and the Muslim Brotherhood leave no doubt that they intend to permit only Muslims, Christians and Jews to practice their religion openly. This excludes religious minorities such as the Baha'i. Osama Nour El-Din, the Freedom and Justice Party's Director of Research, justifies this as follows: "Throughout history, Egyptians have never followed other religions. Our traditions would not permit us to accept these as part of society, because that would create a lot of social conflict."
Will this convention be dissolved?
Many are asking if this is what the Egyptian revolution was for
To add weight to their criticism, the non-Islamist members of the constitutional convention have joined forces. They are even considering initiating an alternative convention. Similar attempts to do this in the past, however, have failed.
According to Ragab Saad Taha, it's unlikely that even dissolving the current convention will make much difference. "The Muslim Brotherhood's spokesman has said that the president would just reconvene the convention with the same members," he points out. "So they would just continue working on the same draft constitution as before."
Tweet
Pope Shenouda Article