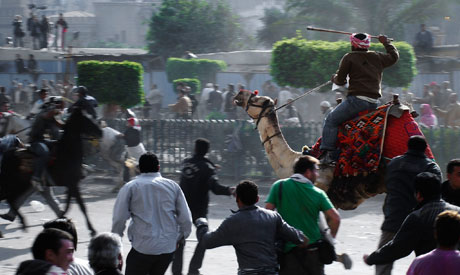 The 25 defendants acquitted of orchestrating the 2 February 2011 "Battle of Camel" attack on Tahrir Square, could be retried, Egypt presidential advisor Seif Abdel-Fattah said on Wednesday.

Senior Hosni Mubarak-era officials were among those exonerated, including former minister of information and chairman of the Shura Council Safwat El-Sherif, MP of Mubarak's now-defunct National Democratic Party Mohamed Abul-Enin and former parliament speaker Fathi Sorou.
"The presidency is committed to fulfilling the promise it made in re-trying those who were accused of killing protesters during the revolution," Seif Abdel-Fattah told Ahram’s Arabic-language portal, shortly after the verdict.
"President Morsi has drawn up a fact-finding committee to look into the cases of killing protesters and it acquired new information that will prompt it to demand a re-trial for those who were acquitted."
Following the ruling, influential April 6 Movement called for protests on Thursday in downtown Cairo.
"If our demands of a re-trial are not fulfilled we will stage a sit-in in front of the general prosecutor’s office until further notice," the movement said in a statement on its Facebook page.
"Farcical verdict"
Many political and human rights activists said they were disappointed by the verdict, with some calling on Morsi to intervene and order a retrial.
The ruling will heap more pressure on the Egyptian president, who is yet to win over activists and youth protesters who feel he has not done enough to purge former regime figures from state bodies.
State prosecutors also came under fire for failing to provide adequate evidence to convict the defendants in the Battle of the Camel case.
"All the parties who investigated the incident are to blame. They forced the judge to issue a farcical verdict," said Mohamed El-Beltagi, an official in the Muslim Brotherhood's Freedom and Justice Party (FJP) to Ahram Online.
"The matter is now in the hands of president Morsi, who should retry the criminals and assign that responsibility to fair judicial bodies."
Human rights lawyer Gamal Eid mocked the ruling on his Twitter account, pointing the finger at the investigative bodies rather than the judge.
"All of them are innocent, including those who are at large. I believe the judge is crying now, but he is not the one to blame," he said.
"Welcome to the revolutionary, modern and civil Egypt - the oasis of escaping punishment," he sarcastically added.
The verdict is expected to spice up Friday’s planned demonstrations in the iconic Tahrir square, which lists key grievances including that those responsible for killing demonstrators during last year's 18-day uprising are brought to justice.
Twenty-one protesters were killed and hundreds injured on 2 February 2011, when plain-clothed assailants, some on horse and camelback, violently attacked a sit-in Tahrir square.
Eyewitnesses said at the time that the armed forces, who were stationed at key points around the square, did not intervene to prevent the bloodshed. Snipers were also, reportedly, deployed on the tops of surrounding buildings shooting at the demonstrators.
Tweet
Pope Shenouda Article