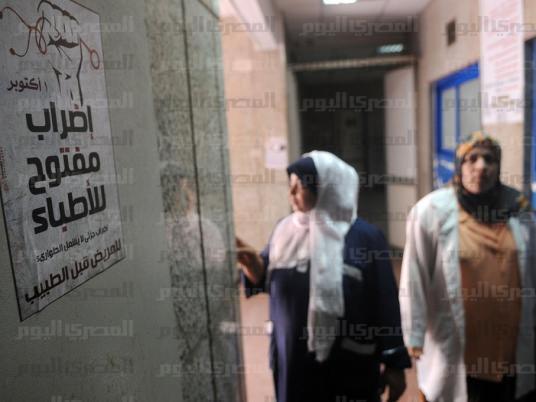 A group of political parties, movements, and independent trade unions signed a statement declaring their full support for the doctors’ strike, amid accusations that support or opposition of the strike is politically motivated.

The statement said that the strike aims to provide better medical services and a higher standard of living for doctors and healthcare workers.
The statement denounced the pressures exerted by what it called “the regime of Mohamed Morsy” to break the strike, including media smear campaigns waged by state-run TV channels and newspapers.
The statement was signed by the Constitution Party, co-founded by Mohamed ElBaradei; the Strong Egypt Party, founded by former presidential candidate Abdel Moneim Abouel Fotouh; and a number of leftist parties.
It was also signed by the Revolutionary Socialists, independent trade unions and some democratic movements that took part in the revolution, such as Kefaya and the National Front for Justice and Democracy.
A number of leftists and trade union figures were invited to attend a press conference held on Wednesday at the Doctors Syndicate, including Kamal Abu Eitta, a senior member of the Independent Union of Real Estate Tax, and Mohamed Waked of the National Front for Justice and Democracy.
The doctors attending the conference stressed that there would be escalation if the demands were not met, such as submitting mass resignations to the Health Ministry.
The conference was not attended by all the members of the union, but was only attended by members of Doctors Without Rights and the General Committee to Manage the Strike, which was formed by the General Assembly of the syndicate. The assembly called for the strike after Muslim Brotherhood doctors and the head of the syndicate withdrew.
Doctors Syndicate Secretary General Abdel Fattah Rizq entered the conference room to greet Abu Eitta and told him jokingly, “This is syndicate work and not a political act,” before leaving the room.
Rizqtold Egypt Independent that neither the Syndicate Council, the syndicate head nor himself were notified that this conference would be held. He denounced unpermitted meetings taking place inside the syndicate, especially since those who attended were representatives of political forces.
“Union work has its mechanisms, motives and conditions, as well as political actions. They shall never be confused,” Rizq said.
The Doctors Syndicate published a statement on its website deploring the decision to hold the press conference without the knowledge or permission of the Syndicate Council. It stressed the importance of not mixing union affairs and political work and demanded that political forces not interfere with such mechanisms, which it said could result in negative effects on doctors’ interests.
Amr al-Shura, a member of both the strike’s supreme committee and Doctors Without Rights, said that the signatories of the statement came voluntarily and in solidarity with the demands of the doctors. He said they did not attend with partisan or political aims, adding that the demands of the strike do not affect doctors alone, but aim to achieve a good health care system that benefits the entire community.
Shura stressed that they may receive support from any entity that reaches out to help the strike so that doctors’ voices may reach the Egyptian street in light of the deliberate smear campaigns against the strike.
“The first to mix political and union work was the Brotherhood,” Shura added. “They used to use their control over the trade unions to pressure governments, and they still adopt [this] policy.
Shura explained that the members of Doctors for Egypt all are from the Brotherhood, unlike Doctors Without Rights, which includes members from a diverse mix of different political affiliations, with the exception of the Brotherhood, which withdrew.
Muslim Brotherhood member Abdallah al-Keriyoni, who is also a member of the Syndicate Council, said that certain political groups want to exploit the strike to achieve personal interests by bringing the doctors to their side, and stressed that such actions may be detrimental to the doctors.
“We welcome all forms of support from different entities as long as it is done in an acceptable and legal form, away from one-upmanship, because such interventions arouse the resentment of many doctors,” Keriyoni added.
“Political parties that want to provide support for doctors can call for support conferences in their headquarters, since no one has the right to storm the syndicate, and hold press conferences like some members of the Socialist People’s Alliance Party and the Egyptian Communist Party, who are not doctors,” he stated.
He stressed that the Syndicate Council alone has the right to manage the strike and that there is no Supreme Committee to Manage the Strike, because it is not legal.
He added that the Syndicate Council supports the strike and would not go against the decision of the General Assembly.
Tweet
Pope Shenouda Article