Acting head of FJP is sued by an Anchor 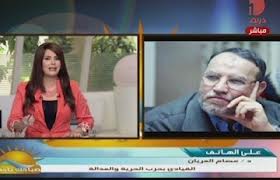 Anchor Jehan Mansour announced that she is going to sue Dr. Essam al-Erian, acting head of Freedom and Justice Party, after he had offended her and accused her that she receives money in order to attack the Muslim Brotherhood.

On the other hand, Board of Trustees of the Egyptian Popular Trend held a meeting yesterday, after which a statement was issued to support Jehan Mansour against what they called the terrorization of the ruling party.