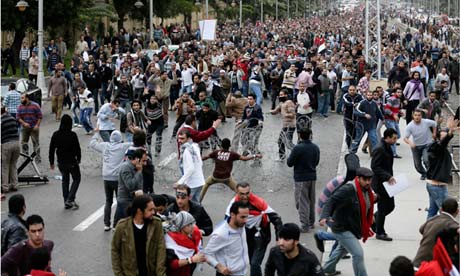 Egyptian President Mohammed Morsi on Thursday urged protesters to leave the presidential palace area, where at least six people died and 700 were injured Wednesday in the worst violence of a two-week long political crisis that threatens to destabilize the nation.

Pro-Morsi demonstrators seemed to heed the president’s call, but there was little sign that the crisis was abating. While the area in front of the palace was less crowded at midday, anti-Morsi protesters were reportedly marching back to the palace and also to Tahrir Square, the site of the 2011 uprising that led to the toppling of former Egyptian President Hosni Mubarak.
Morsi was scheduled to address the nation Thursday night and reportedly was meeting with his prime minister and defense minister on ways to ease the crisis. But the capital remained tense and polarized, and people were expecting for more violence. Even casual conversations on the street – a request for directions or instructions to a cab driver – were met with questions about which side of the dispute one favored.
The nation’s populace has been divided since a June runoff election that saw Morsi, a longtime official of the Muslim Brotherhood, ascend to the presidency over more secular candidates. But until Wednesday, such divisions had never been deadly. According to the Ministry of Health, six people were killed and nearly 700 others were injured outside the palace Wednesday when pro- and anti-Morsi demonstrators exchanged rocks, Molotov cocktails and occasionally shots. Police did little to stop the violence.
By Thursday morning, elite Republican Guard troops and tanks had been deployed between the two groups of protesters and police were stationed around the palace.
More barricades appeared to have been placed in front of the anti Morsi protesters than had been deployed in front of his supporters. Asked why there were fewer barricades in fron of the pro-Morsi camp, a member of the presidential guard replied, “Because they are Morsi’s beloved ones.”
There was no sign that Morsi was willing to meet opposition demands that he cancel a constitutional referendum on a hastily produced document and withdraw a Nov. 22 decree that declared his decisions above review by the country’s courts, even as the list grew of those urging him to relent.
On Thursday, Al Azhar University, the nation’s highest religious institution, urged Morsi to withdraw his Nov. 22 decree. A day earlier three Morsi advisers and the official tasked with leading the referendum resigned in protest.
Opponents want a new constitution written by a more representative body than the Muslim Brotherhood-dominated constitutional assembly. Liberals, secularists and Christians withdrew from the assembly, leaving Islamists to write the 236-article document.
Tweet
Pope Shenouda Article